This soundtrack is the first of its kind–– no other DC comic book series have had accompanying albums. 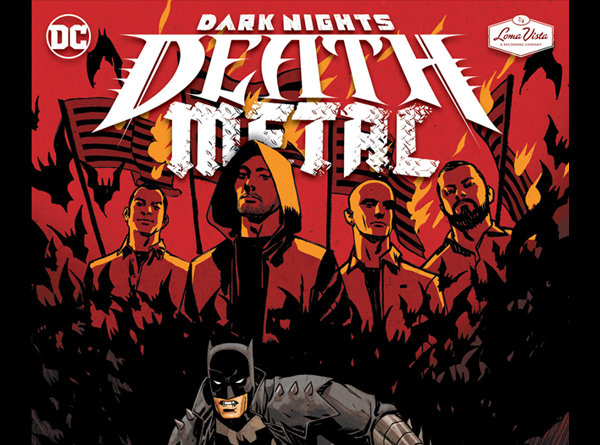 The album was produced by Tyler Bates, known for his work on the soundtracks for John Wick, Guardians of the Galaxy, and Atomic Blonde. Included on the tracklist are musicians spanning a wide range of styles and genres. Contributors on the Dark Nights: Death Metal Soundtrack include Mastodon, Chelsea Wolfe, HEALTH with Chino Moreno, Maria Brink, Grey Daze, Rise Against, Manchester Orchestra, Denzel Curry, Carach Angren, Starcrawler, Gunship, Greg Puciato, Gil Sharone, Show Me The Body, IDLES and Soccer Mommy.

Mastodon released their single and first track of the album ahead of Dark Nights: Death Metal, called “Forged by Neron.” Rise Against’s contribution to the album, “Broken Dreams, Inc.” was released in Sept. 2020. Brann Dailor of Mastodon, Jacob Duszik and John Famiglietti of HEALTH and Chelsea Wolfe, were previously featured in the fourth episode of the series, “Shot in the Dark.”

The numerous contributors to the Dark Nights: Death Metal soundtrack have remained busy throughout the past few months. Mastodon will play Inkcarceration, the music and tattoo festival on Sept. 10, 2021. Chelsea Wolfe has released several collaborations with artist Emma Ruth Rundle, including a single and music video called “Anhedonia.” HEALTH released a new song “Isn’t Everyone,” in collaboration with Nine Inch Nails on May 6, 2021. In addition to Dark Nights: Death Metal, HEALTH contributed to the video game soundtrack for Cyberpunk 2077. Maria Brink of In This Moment recently shared a music video for their song “As Above So Below.” Grey Daze released an acoustic EP, Amends… Stripped and is working on another album. Rise Against just announced their summer 2021 tour dates for their latest album, Nowhere Generation. Manchester Orchestra’s sixth studio album, The Million Masks of God came out on April 30, 2021. To read mxdwn album reviewer Grace Galaragga’s take on The Million Masks of God, click here. Denzel Curry released a song and a music video in 2020, “Live From the Abyss,” and “This Changes Everything,” respectively. Carach Angren’s song “Skull With a Forked Tongue,” was previously used in Dark Nights: Death Metal’s first episode. Starcrawler will be in the Foo Fighters upcoming documentary, What Drives Us. Greg Puciato, of The Black Queen will release a deluxe edition of their album, Fever Daydream to celebrate its five year anniversary. Show Me the Body released an EP called Forever in March, 2021. IDLES was featured on Sharon Von Etten’s latest release, Sharon Von Etten. They also announced a U.S. tour for fall 2021. Soccer Mommy will play the Fonda Theatre on Oct. 28, 2021.