A livestream benefit concert, Rock-N-Relief, has been announced. The two-day event is curated by esteemed songwriter and producer Linda Perry in conjunction with Sean Penn’s establishment CORE (Community Organized Relief Effort) to provide funding for CORE’s work, including its Los Angeles efforts to alleviate the effects of COVID by providing free testing and vaccines.

Upon hearing about the noble opportunity to perform at the event, over 150 artists applied to perform. Perry commented in a press release, “As a mother and fellow member of this community, I wanted to do something to lift spirits and send a positive message of hope and humanity to all the healthcare workers and those on the front lines, as well as raise awareness and funds to support CORE and their relief efforts. When I first put the word out, many jumped on board to contribute; we had over 150 bands submit to play. We are pleased to announce that California Love Drop and Monty’s Good Burger will provide food and beverages to all the digital workers that will be working hard to bring this powerful content to the viewers of this impactful concert series. Our goal is to do everything we can to thank CORE and the self-sacrificing people who keep us safe during this unprecedented crisis.” 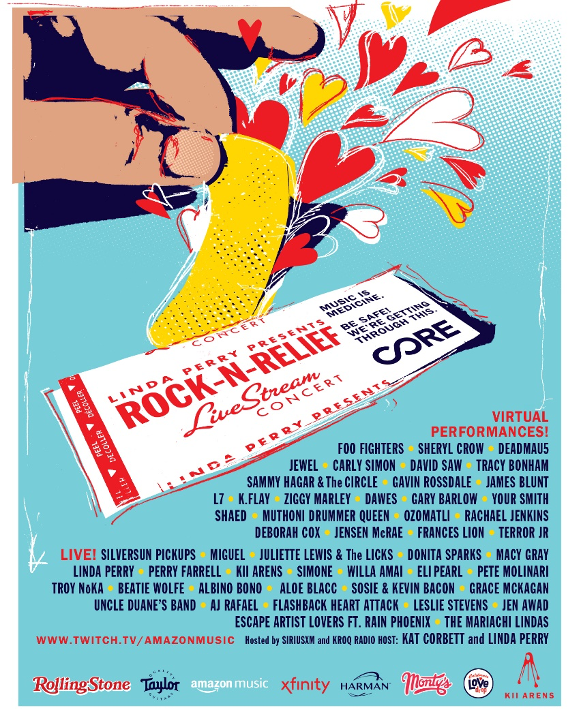 The concert is set to include artists such as Shaed, Macy Gray, Kevin Bacon and L7, who recently shared a video for their Joan Jett & The Blackhearts cover “Fake Friends.”

Silversun Pickups will also make an appearance, and they released a cover as well last year with their version of Martika’s “Toy Soldiers.”

Foo Fighters, who have already had a busy year with their nomination to be a 2021 Rock & Roll Hall of Fame inductee as well as the release of their new album Medicine at Midnight, is included on the roster for the concert.

Also to appear is Sheryl Crow, who is no stranger to live-streamed shows with her prior event Songs From The Big Green Barn last September, as well as her participation in a live stream concert to benefit Joe Biden’s presidential campaign last May.

K. Flay will be included in the event as well. The artist recently released a cover EP, humorously entitled Don’t Judge A Song By Its Cover.