According to the about event section of Estéreo Picnic’s official website, the celebrated headlining acts are the highlights of the festival. The site further voices the ecstatic enthusiasm of featuring the three headlining acts,”Guns N ‘Roses, The Strokes and The Chemical Brothers will be the headliners on April 3, 4 and 5, 2020 at the Briceño 18 Golf Course in Sopó for the best three days of the year. Welcome to the Jungle! Where the grass will be green, the pretty girls and the FEP will take us home with Axl Rose, Slash and Duff McKagan … From New York will come The Strokes and its delicious dance rock classics and punk downloads: ‘Last Nite’, ’12:51′, ‘You Only Live Once’, ‘Someday’ and more. On the other hand, the Chemical Brothers will offer a show that will live eternally in the memory of the Festival and the sound soul of the country.” 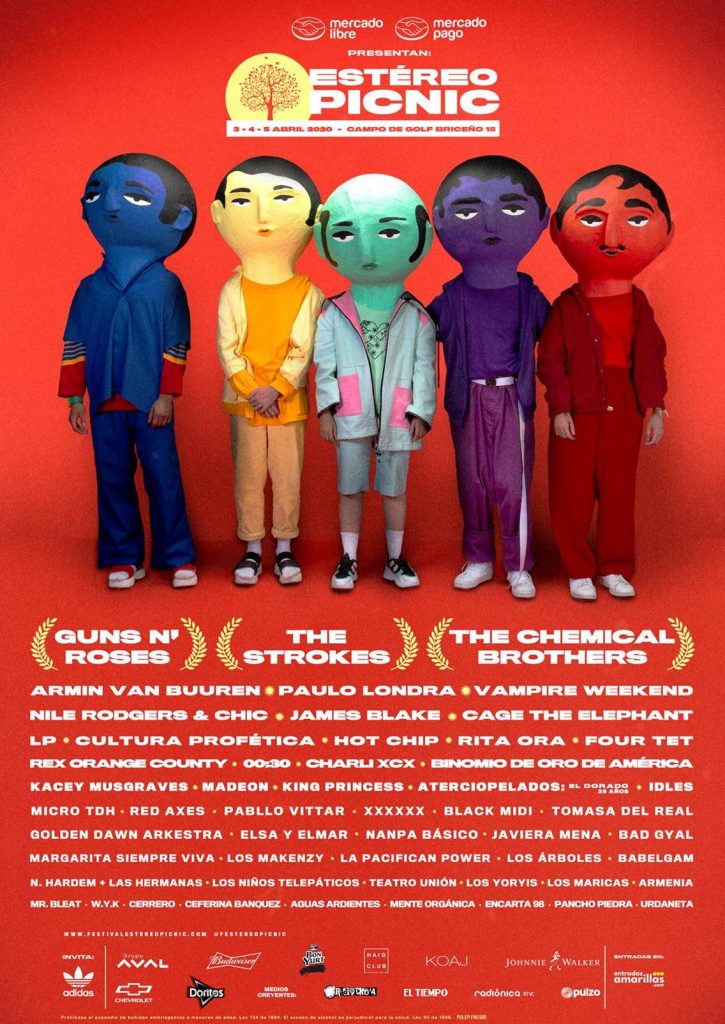 Most recently Guns N’ Roses have announced a slew of arena shows that they are playing this spring. Previously reported here on mxdwn “…Guns ‘N Roses have announced a string of summer 2020 stadium tour dates, adding yet another leg to their reunion tour that began back in 2016. The tour will kick off this July 4th in Milwaukee and conclude on August 26th in Montana.” This summer will see Guns N’ Roses play in Philadelphia’s stadium arena Citizens Bank Park in July. The famed hard rock collective who have over the years recorded six studio albums together are set to reunite illustrating that “These legendary and incredibly influential artists will be performing at Citizens Bank Park, presumably selling out this massive arena. Get your tickets while they last and don’t miss out on your chance to see GNR live before it’s too late.”  The famed rock collective will also have the chance to perform for the first time ever in the brand new SoFi Stadium in Inglewood, California later this year in August.

The Strokes have recently released new material that will set to be featured on their forthcoming full length sixth studio album, The New Abnormal. As previously reported here on mxdwn, “Garage rock revival icons The Strokes have revealed a new song titled “Bad Decisions,’ which will be featured on their forthcoming album release The New Abnormal, out on April 10th.  This new track interpolates a melody from Billy Idol’s “Dancing With Myself,” and gives a writing credit to Idol and Tony James, who wrote that song according to Pitchfork.”

Electronic British duo The Chemical Brothers are set to perform this summer as well in Barcelona, Spain. As previously reported here on mxdwn, “Barcelona’s Sónar arts, design, and electronic and advanced music festival has announced its 2020 lineup. The three-day festival , split into Sónar by Day and Sónar by Night from June 18-19, features acts like The Chemical Brothers, Arca, THE BLAZE, Carl Cox, Mura Masa, Eric Prydz, Richie Hawtin, AJ Tracey, Laurent Garnier, Dave, The Black Madonna, and Princess Nokia.” The aforementioned mxdwn article furthers that, Headliner The Chemical Brothers released their latest album, No Geography, last spring to positive reviews. The British duo will play Sónar by Night, along with Swedish DJ Eric Prydz and Kentucky-native The Black Madonna.”

To inquire further for the full extensive roster of recording artists featured in this year’s Estéreo Picnic music festival and to purchase tickets, visit here.