The best of  hard rock and metal will show up July 27-29 in Bangor, Maine for the inaugural Impact Music Festival. The event will be held by Waterfront concerts at the Darling’s Waterfront Pavilion and it will try to use the power of music to bring attention on the importance of suicide prevention and mental health awareness.

The event will start with a bang on Friday July 27 with heavy-hitters Napalm Death, Testament, Anthrax, Lamb of God and will be headlined by Slayer; who announced in January their final world tour in 2018 after which they intend to retire.

Saturday features a longer day of explosions with bands such as Emmure, Bad Omens,  Powerman 5000, Corrosion of Conformity, Hollywood Undead, Trivium, Gojira, Black Label Society, Three Days Grace, Prophets of Rage and will be headlined by Avenged Sevenfold; who just announced a summer 2018 tour with Prophets of Rage.

The festival will close Sunday with a dynamic list of bands such as Miss May I, Pallbearer, We Came as Romans, Attila, Baroness, P.O.D, Of Mice & Men, Underoath, Marilyn Manson and will we headlined by Rob Zombie; who just announced a co-headlining 2018 summer tour with Marilyn Manson.

A percentage of the proceeds raised will go to Music Matters which is a Maine based nonprofit with a primary focus on mental health awareness, education and suicide prevention. For ticketing and other information go here.

Below is the full lineup. 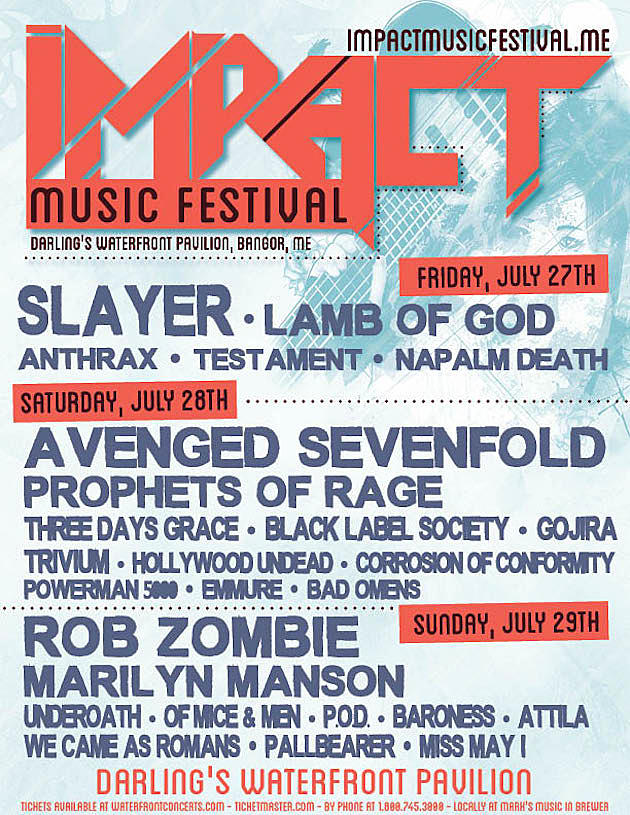