Heavy metal band Avenged Sevenfold has recently announced a join tour with rap-metal supergroup Prophets of Rage. The two bands will join forces in a tour called End of the World tour, next summer.

The Grammy Nominee California-based band will also be joined by Three Days Grace on a tour that is set to kick off on July 22nd at the Xfinity Center in Mansfield, MA and continue throughout the United States and parts of Canada until September 2nd in Houston,TX for the Cynthia Woods Mitchell Pavilion, presented by Huntsman. Major American cities will be visited along the way, such as Pittsburgh, PA, Cincinnati, OH, Detroit, MI, Las Vegas, NV and Los Angeles,CA.

Once again the band restores its partnership with CID Entertainment for this upcoming tour. VIP experiences and packages have been proven very effective and well received by fans in the past. Options such as “Hail To The King”, “A7X Experiences” and “Higher’ Seamless Experiences”, sold out in virtually every city on the tour. This time, however, CID entertainment will take the packages to another level with backstage tours, photos on the stage, exciting new interactive experiences and added memorabilia to The Paradigm Lounge, as they report on their website.

The band will also be a part of Impact Music Festival Waterfront Pavilion in Bangor, Maine. The event, endorsed by Waterfront Concerts and Music Matters, will feature Avenged Sevenfold, Slayer and Rob Zombie and will be held on July 27-29. Impact Music Festival, moreover, is designed to “shine a spotlight on the importance of suicide prevention and mental health awareness”, reports Loudwire.

Loudwire has also reported that Avenged Sevenfold refused to attend the Grammy ceremony as a sign of protest for not televising the Rock and Metal categories, leaving them to the pre-show online telecast. The band’s song “The Stage” was nominated for Best Rock Song.

Prophets of Rage, on the other hand, which consists of the union of members of Rage Against The Machine, Public Enemy and Cypress Hill, dropped their debut self-titled album in 2017 and a new video titled Hands Up a few months ago. They recently performed their song Legalize Me on Jimmy Kimmel Live. 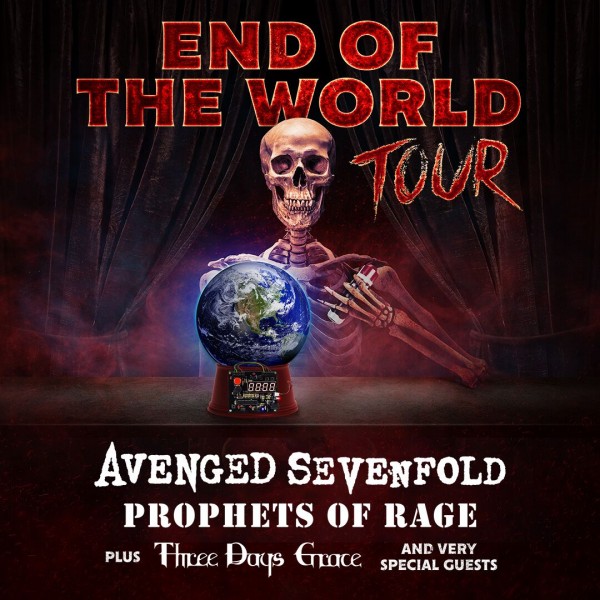 ** With Prophets of Rage plus very special guests