Warpaint has released a new funky single titled “Hips” from their forthcoming album Radiate Like This, out May 6. Additionally, the band has confirmed the Radiate Like This tour, a run of U.S. dates beginning this July in Los Angeles, New York, Boston and Washington D.C., with further stops in Chicago, Austin and Seattle—you can see the full list of dates below, and order tickets here.

“Hips” is a clever, dreamy, but funky tune with a great melody, and incredible vocal harmonies. Warpaint’s Emily Kokal likens the track to “gyrations of the birth of a new world,” and the track certainly has an ethereal, rosehips-and-milk kind of vibe to it, intermixed with funky, 80s licks.

The announcement of Radiate Like This was a surprise for fans, as this is their first full-length album release in 6 years. Since 2016’s much-lauded Heads Up, Warpaint’s four members—Emily Kokal, Jenny Lee Lindberg, Stella Mozgawa and Theresa Wayman—have been busy living. Some have had children, taken jobs, toured, recorded solo albums and moved across the country and around the world from one another. But the group found some time for self-reflection, and it resulted in the 10 new songs that make up Radiate Like This.

Warpaint did not record this album with all band members together in the same studio. The pandemic, life changes, and personal development allowed the band to explore new ways of creating music in a world where remote work can make anything possible. Radiate Like This was recorded layer-by-layer, which each musician recording from opposite sides of the country, and put together with heart and soul. You can stream “Hips” below. 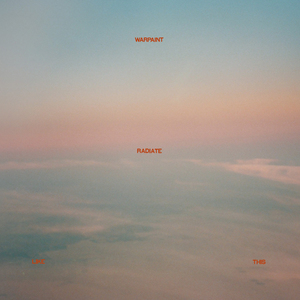