Japanese metal band Boris has announced their first streaming show for their album No. The event, recorded in November of 2020, will premiere on May 1, 2021 and be available to watch through May 10.

The livestream program has a 50-minute runtime and will be available on Boris’ YouTube channel. Viewing the livestreamed concert will be free, though donations to the band’s Paypal are recommended. In their announcement, the band released a trailer for the livestream. 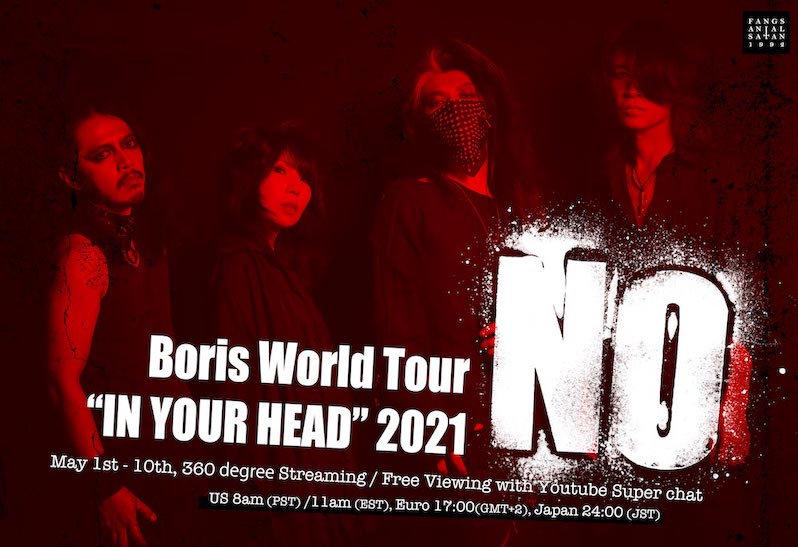 Boris’ latest album was released in collaboration with another Japanese musician, Merzbow. The album, 2R0I2P0, was released in December of 2020. 2R0I2P0 is an anagram of “RIP 2020.” The album was underwhelming, “At best, it’s a really abrasive album that flirts with expressive soundscapes both harsh and beautiful in nature that are enveloped in noisy-as-hell electronics, but at worst, 2R0I2P0 just sounds like Boris sent raw tracks of uninspired drone and doom metal to Merzbow, with him superimposing several noise tracks on top of it, with little to no regard for the direction of the album, the song or even the isolated parts,” according to mxdwn album reviewer Victor Nica.

Boris was formed in Tokyo in 1992. The name comes from a Melvins song titled “Boris,” released on their Bullhead album. On 2R0I2P0, Boris released a cover the Melvin’s song. The band currently consists of three performers: Takeshi (bass guitar), Wata (lead guitar) and Atsuo (drums). All three members contribute to vocal performance.