Back To The Beach Announces 2019 Lineup Featuring blink-182, The Used and Anthony Green - mxdwn Music

Back To The Beach Announces 2019 Lineup Featuring blink-182, The Used and Anthony Green

For the second year running, Back to the Beach will return to the sunny beaches of Southern California. Travis Barker and John “Feldy” Feldman, in conjunction with alternative radio station KROQ, have put together an exciting lineup that will be headlined by blink-182 and The Used. The all ages festival assures a fun-filled weekend for the entire family, with electrifying music, a carnival taking place midway through, various beach games and food options, and an all-inclusive Lil’ Punk Kidzone for children under 10. Back to the Beach will be lighting up Huntington State Beach in Orange County on April 27 and 28.

Headliners will be accompanied by ska punk favorites Reel Big Fish, vocalist Anthony Green of Circa Survive and Saosin, Feldy’s very own Goldfinger (with special guests), and California natives The Story So Far. The festival will also include performances by Less Than Jake, Story of the Year, crime-fighting rockers The Aquabats, Save Ferris, and The English Beat, who is also set to play at KAABOO Cayman this February.

Coming off from their residency at the Palms Casino Resort in Las Vegas, blink-182 are also set to headline Riot Fest 2019 in Chicago, Illinois after their cancellation last year. They will be sharing the stage with Orange County’s very own Reel Big Fish, who recently released their 9th studio album in December 2018. 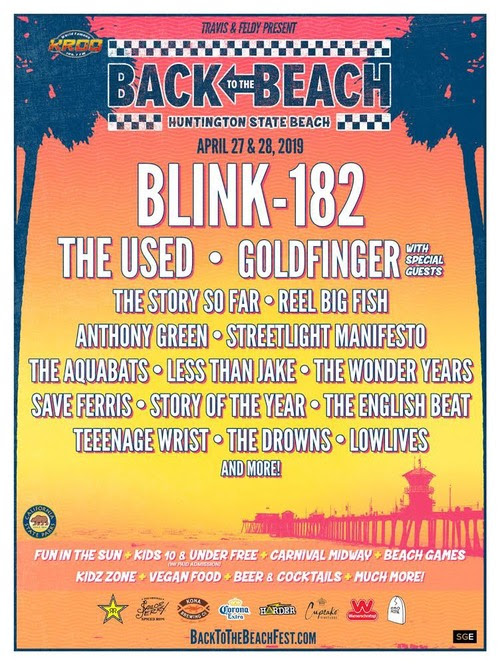