Destination festival Kaaboo Cayman has announced the lineup for their 2019 Caribbean expansion including headliners Blondie, Duran Duran, Salt-N-Pepa and The English Beat as well as with comedy acts Wanda Sykes, David Spade and Tom Green.

According to The San Diego Union-Tribune, Kaaboo was founded in 2015 by Bryan E. Gordon, chairman of The Madison Companies LLC, a multibillion-dollar investment firm. Kaaboo, which synthesizes the festival experience by integrating music, comedy and culinary arts, debuted in 2015 in Del Mar and has been steadily expanding.

Jason Felts, chief brand officer of Kaaboo and CEO of Virgin Produced, spoke with Billboard about Kaaboo’s target audience: “They want a sophisticated infrastructure and a range of music from bucket list artists they grew up with to today’s hit-makers on the radio,”

He goes on to talk about Kaaboo expanding: “In looking at the growth of KAABOO into a multi-event business and as a lifestyle brand, it was important to us to identify destinations that would resonate with the KAABOO fan looking for a more elevated experience. Cayman was the right fit. It’s a destination that has close proximity to the United States, which is where a lot of our brand fans live. It has a very sophisticated infrastructure and has a wide range of lodging options from three-star all the way up to five-star, with [hotels], villas, condos and many places to sleep. And it is the safest country in the Caribbean.”

The San Diego Tribune reports tickets range from $187.50 for general admission to a $500,000 VIP Dream Pass which is limited to one pass for four people. The pass includes round-trip transportation, use of a yacht, a villa replete with a chef and butler and a private viewing area for the two main stages.

Cayman Kaaboo, with its international destination and luxury price tag, is reminiscent of Fyre Fest, whose failure was plagued with fraud and litigation.

Felts responded to the similarity, saying, “The good news is we’re not Fyre Fest. They had (bad) timing and a lack of operational experience, professional gravitas, money and a sophisticated environment for their festival. They were on a deserted island; we could not be further from a deserted island.”

Kaaboo has indicated they are spending a considerable amount of time and energy towards designing and implementing functional infrastructure to combat operational issues. The elite festival will take place February 15-16, 2019 in Grand Cayman. 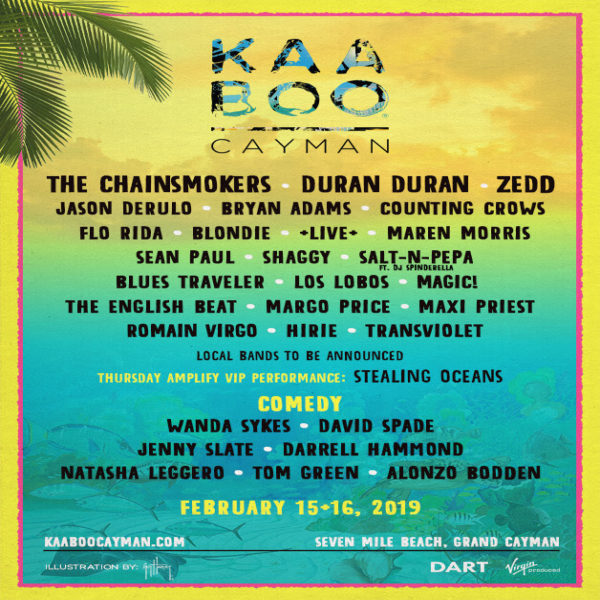