Primus and Mastodon Get Zany at the Greek Theater - mxdwn Music

Primus and Mastodon Get Zany at the Greek Theater

One of the most intriguing summer tours came to the Greek Theater at UC Berkeley on Friday night as alt-metal heroes Primus and Mastodon both played full sets that showcased just how stunningly brilliant both bands are in the live arena. Mastodon was up first, rolling through a massive 17-song set that spanned the majority of their career, with a focus on newer material from their excellent new album Emperor of Sand.

The band opened their set with the furious thrash of “Sultan’s Curse” a song that rode some ferocious rhythm guitar playing from Bill Kelliher and some country-influenced lead work from Brent Hinds. Next up was the wacky country-metal of “Divinations,” a song that showcased all of the strongest aspects of Mastodon’s sound; namely the epic dual guitar harmonies of Kelliher and Hinds, the stomping drum work of Brann Dailor and the high-flying vocals of Troy Sanders. With a bunch of flashing lights and LED screens backing them, Mastodon provided fans with an intoxicating experience. What makes Mastodon such a fascinating live band is the fact that Dailor, Sanders and Hinds all share vocal duties, giving each song plenty of emotion and dynamic range. 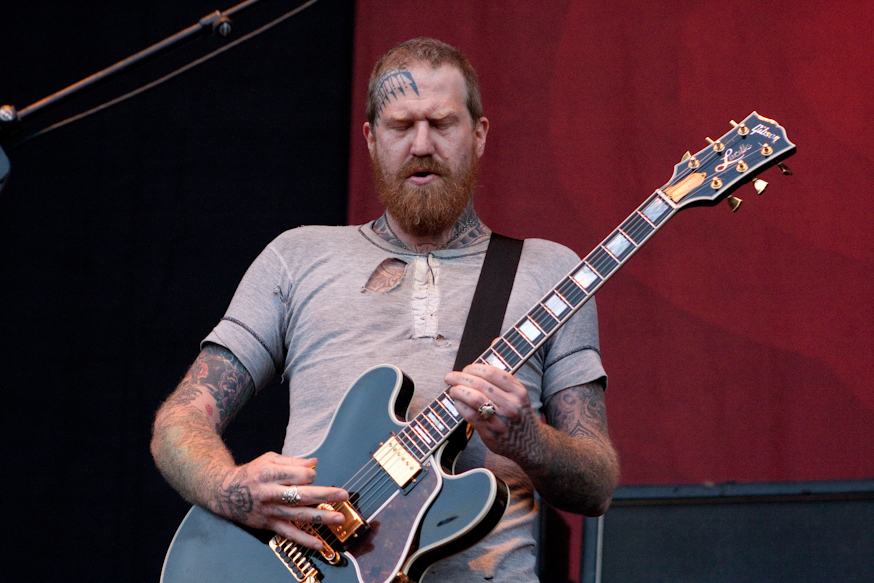 Next up was an old track from the band’s legendary Blood Mountain record, the atonal groove of “Crystal Skull.” Driven by a snappy and syncopated drum beat from Dailor, the song opened up a massive mosh pit in front of the stage, as fans got swept up in the song’s blistering tempo. Another early high came in the form of the epic and melodic “Ember City.” The piece revolved around a slick twin-guitar harmony, with Sanders taking over the lead vocals during the verses while Dailor delivered some of his best singing during some particularly upbeat chorus sections. Mastodon continued to alternate between new and old material for the next few songs before digging back into their catalog for the old fan-favorite “Megalodon.” As one of the fastest songs of the evening, the track really got the mosh pit fired up especially as a wacky mid-song country breakdown gave way to a warp-speed thrash metal section.

Finally, the group closed out their set with a storming version of another Emperor of Sand track, the de-tuned sludge of “Steambreather.” The song began with a swaggering sludge riff, along with a jazzy, syncopated drum beat as Hinds and Kelliher traded off some blistering guitar solos before the song picked up the pace into an anthemic chorus. With a continued musical evolution of the course of their career, Mastodon has developed into a mighty live unit, capable of winning the audience over with upbeat melodicism or pummeling grooves. 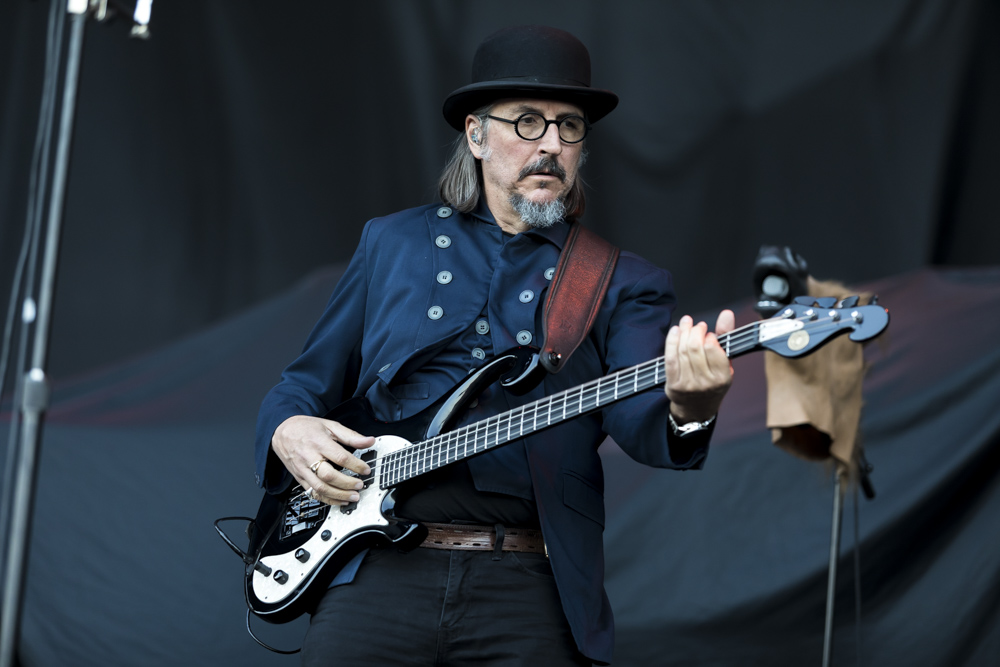 As the sun began to set and the packed crowd began to chant “Primus Sucks,” a term of endearment if there ever was one, the roadies quickly set up and sound-checked and all of a sudden Primus strode onto the stage. Opening with the quirky bass-vamp of “Too Many Puppies” the band played through an impressive set spanning their entire career, with the group playing the entirety of their new record, The Desaturating Seven, mid-way through the set. First, the group focused on old classics, with some zany and seeming random spectacles thrown in.

After tearing through the wacky “Sgt. Baker,” bassist Les Claypool took a few moments to noodle around before playing the bass intro to the legendary Rush epic “Cygnus X-1” before the rest of the band joined in for an impromptu cover. Then, suddenly the group turned the vamp into the stuttering funk of “Wynona’s Big Brown Beaver,” a sizzling blend of weird guitar licks from Larry “Ler” LaLonde and plenty of drum acrobatics from Tim “Herb” Alexander. Primus was not done with surprises, far from it actually. As the band rolled through the brooding melodicism of “Southbound Pachyderm,” Jello Biafra, lead singer of the Dead Kennedy’s came on stage and grabbed a microphone, just as the band started playing a revved-up version of the Dead Kennedy’s classic “Holiday In Cambodia.” Biafra was in fine form as always, with his furious delivery and crazed stage antics working the crowd into a fury. 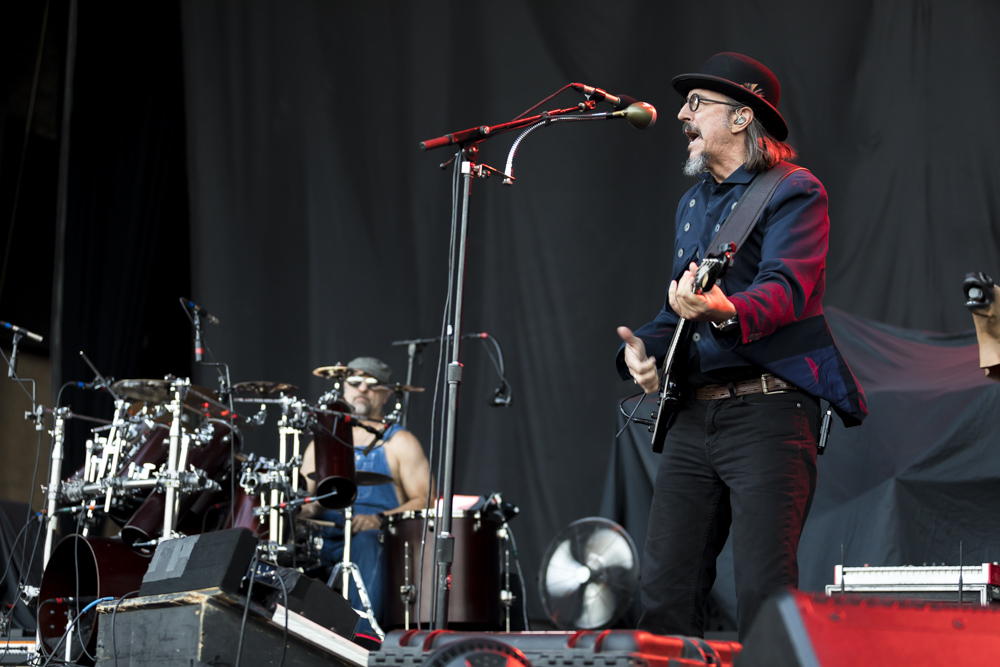 After that there was a brief intermission as Claypool donned a goblin outfit and projections of the goblin-themed cover art from The Desaturating Seven appeared on the LED screens behind the band. For the next half hour, the band performed their latest record, a weird epic that saw Primus go from English folk to storming heavy metal in the blink of an eye. It was also a chance for Claypool to show off his prodigious skills on upright bass, playing plenty of tasteful melodic fills that were far away in style from his regular slap-bass mastery.

Once the band wrapped up the album, there was another small break before Sanders and Dailor came on stage with Primus to tear through an impressive rendition of the Peter Gabriel classic “Intruder.” Primus had been performing this cover for most of this tour so while it was not a massive surprise to see them roll it out, its execution was masterful. Driven by a weird atonal series of harmonies, the song translated very well to the live stage, as its disjointed yet catchy drum beat was the perfect way for Dailor and Alexander to show off their rhythmic skills.

A few songs later Primus closed out the main portion of their set with the all-time classic “My Name Is Mud.” As usual, the song was a demonstration of the band’s supreme musical ability, as Claypool’s hyper-slapped bass locked in perfectly with Alexander’s syncopated drum beat and LaLonde’s zippy guitar leads. Primus returned for a one-song encore in the form of the crazed funk of “Tommy the Cat,” which featured one of Claypool’s best bass solos of the whole night.

As Claypool remarked to the crowd near the end of the set, this was the longest tour Primus has done in nearly 20 years, making it even more impressive that the group was able to deliver such a powerful and awe-inspiring performance. Now 30 years into their career, the band shows no signs of slowing down, in fact, the opposite is now true: Primus is playing some of the best live shows in the history of the band.