Alternative rock front man Chuck Mosley announced the kick-off of his North American tour “Reintroduce Yourself 2017.”  The tour launched on August 6, 2017 in Ohio and will go throughout  the United States in the next 3 months. 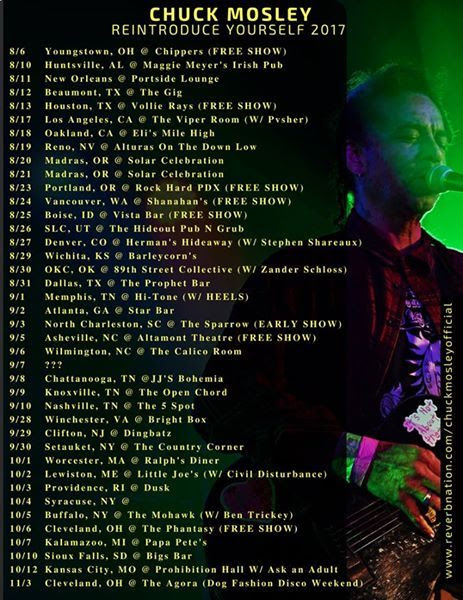 This is the second year of his “Reintroduce Yourself” tour.  It includes a mashup of older songs and new material that was written less than a month old.

In 2016 Mosley also reunited with his friends from “Faith No More” for two shows to celebrate the reissuing of We Care A Lot.  the 31-year old song still cracked the top 200-Billboard.

Mosley also is performing the lead vocals for “Primitive Race’s” album Soul Pretender, which is set to be released this November through Metropolis.

While playing extensively through the U.K., the US and France, Mosley created a dozen new songs which are currently being polished for an upcoming recording session.  The producer for this project is going to be the renowned Maroon 5 and Deftone’s, Matt Wallace.  When asked about Mosley’s new songs, Wallace said:

“I’ve always been a die hard fan of the honestly in his lyrics and his deceptively simple melodies, that always become ear worms and soul worms.”

Chuck’s stubborn resilience has kept his career going through many phases. Currently playing out as a “semi-acoustic” four piece (including Cris Morgan on guitar, Joshua Nelson on bass, and Douglas Esper on percussion) Chuck is still challenging the boundaries of musical genres.