After rumors of a tour happening, heavy metal band Fear Factory has finally announced that they will be going on tour this spring throughout the U.S. Swedish death metal band Soilwork will also be joining them. Fear Factory plans to play their album Demanufacture in its entirety on their tour. The album was the band’s second studio album, released in 1995, and is considered their most defining work. Many fans cite it as their best album and a heavy metal classic. Demanufacture is a concept album about a man’s struggles against a machine-controlled government. Each song is a chapter of the man’s life. Fear Factory said that the album was inspired by the movie The Terminator. Critics acclaimed the album, considering it a landmark record in alternative metal and heavy metal in general. The band toured back in 2013 in Australia, also performing Demanufacture in its entirety. 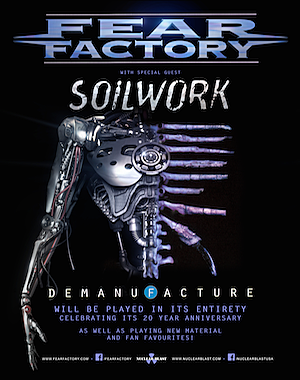 Last August, Fear Factory released their ninth studio album Genexus after playing at various European festivals that July, then moved on to more touring in North America. Genexus was the first album to feature drummer Mike Heller, and also their first release through the record label Nuclear Blast (there’s a great review of the album here). The album received positive reviews from critics, and the band went on to tour in parts of Europe, also playing the Demanufacture album in full. Fear Factory will also play songs from Genexus in addition to the full Demanufacture tracklist. Though the band has had its disputes in the past and they’ve changed members a bit, lead vocalist Burton C. Bell has been the sole consistent member of the band since 1989, when Fear Factory first formed. Regardless of the band’s lineup, Fear Factory has sold more than a million albums in the U.S. alone and their albums have charted the Billboard Top 40 several times.

Swedish death metal band Soilwork will also be joining the band on tour, and they’ve been around since 1995. They released their tenth studio album The Ride Majestic last August and will be promoting the album on this tour. This was shortly after their longtime bassist Ola Flink left the band in June and was later replaced by Markus Wibom.