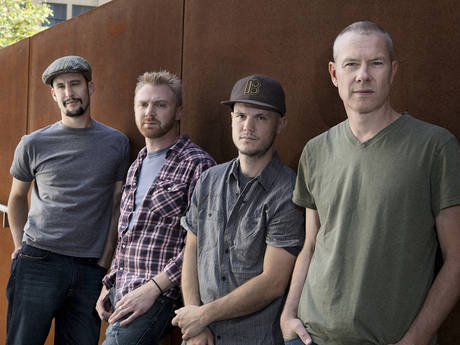 Helmet is what happens when metal sports a punk rock mentality. They have the stylistic workings to be able to be in the metal box, but droning and taunting vocals with the added element of genre crossing experimentation sets them in a uniquely different one. The newly released Seeing Eye Dog LP shows an even further reach in experimentation, seeming to be put together more as a film score  (perhaps banking on sole permanent member Page Hamilton’s experience with doing so) than a consciously constructed album.

There is still a lot of Helmet’s signature drivingly fast style and odd time signature work that can be found here. It’s still definitely the same band. The main evolution is Hamilton’s vocal ranges and many more smaller tweaks that you wouldn’t necessarily have expected to come around when listening to past albums. Opening track ‘So Long’ has a riff with the power of a million chainsaws and Hamiliton’s vocals have a strong forceful sneer to them that make past attempts on Betty and even as far back as Strap It On seem lite in comparison. The major stylistic changes come to light around track 4, ‘LA Water.’ This is a really odd comparison, but this song genuinely reminds me of Autolux’s ‘Turnstile Blues’ at times, listen to them one after the other, and I think anyone could. If you took the decidedly metal guitar work off this song, it would sound like experimental Indie. Wild. ‘Morphing’ is the albums only instrumental track, it’s a beautiful mix of symphonic and dizzying ambience with eery female vocals. In the foreground you have a heaving distant guitar, unpredictably bleeding out minimalist few note riffs. This is not a metal song, or anywhere near the rock genre. It doesn’t sound like any past Helmet songs, it sounds like Hamilton’s film work and it’s a stunning piece of music. This bleeds hastily and slovenly into the track ‘White City.’ You find yourself wondering what just happened, as the music snaps your mind away from the beautiful ambience, once again reminding you which band your listening to with this heavily 90’s vibed song. The track ‘Miserable’ gives an undoubtable nod to the Meantime album and popular tracks such as ‘Unsung.’ Guitar work on closing track ‘She’s Lost’ sounds like the tik tok of a clock, and sports no straying from classic Helmet, or too many efforts of their newer peers really.

Seeing Eye Dog is not a flat album in the least bit, but it doesn’t necessarily have a comfortable flow to the sound, almost messily wrenched together. That being said, each song speaks for itself as a complete presentation of where this band can take their sound. Stylistic innovation and variation create a million sound spheres to get lost in making it a great listen if each part is taken for what it is.

Helmet live is just pure rock. Non-stop guitars, and pounding drums. If you’ve followed the band from the early days, you won’t recognize a single face on stage except Hamilton’s, but all these guys are amazing musicians. Furious, feedback heavy energy coming off the stage at all times. Expect to hear new and old, with lots of opportunities to head bang and mosh like crazy all night long.