Influential Canadian folk singer-songwriter, Joni Mitchell, recently announced the release of forthcoming boxsets releasing over the next few years, marking the first time Mitchell is opening her vault to the public of previously unreleased recorded material. According to Stereo Gum, “The series kicks off on 10/30 with the release of Joni Mitchell Archives Vol. 1: The Early Years (1963 To 1967), a deluxe 5-CD set featuring nearly six hours of unreleased home, live, and radio recordings leading up to her 1968 debut album, including 29 original Mitchell compositions that have never been released with her vocals.”

Mitchell, whose origins in the music industry date back to the mid 1960s, has recorded a total of nineteen full-length studio albums. Her most recent, and believed to her last, studio album was Shine released back in September 2007, via Hear Music/Universal. On the forthcoming boxset, Mitchell recently shared her cover of “House of The Rising Sun” which according to the above source is “…a 19-year-old Mitchell playing “House Of The Rising Sun” at the CFQC AM radio station in her hometown of Saskatoon, Saskatchewan.” This acoustic cover is a tender melancholic, deeply harrowing track that captures Mitchell’s naivety in her early stages, singing in an angelic register that is tragically beautiful. To listen to “House Of The Rising Sun” stream below, via YouTube.

Speaking on the musical allure of Mitchell and her reluctance to listen and eventually releasing early home recordings of previously unreleased demos, Mitchell spoke candidly according to a press release, as previously noted in the aforementioned source, saying:

“The early stuff, I shouldn’t be such a snob against it. A lot of these songs, I just lost them. They fell away. They only exist in these recordings. For so long I rebelled against the term, ‘I was never a folk-singer.’ I would get pissed off if they put that label on me. I didn’t think it was a good description of what I was. And then I listened and … it was beautiful. It made me forgive my beginnings. And I had this realization … I was a folk singer!

Speaking to the musical influence of Mitchell’s seminal works on present day contemporary pop and alternative musical artists, last year Lana Del Rey along with Weyes Blood and Zella Day covered Mitchell’s 1970 song “For Free.” As previously reported, here on mxdwn, “The performer’s cover of “For Free,” was unveiled during a performance in Seattle, Washington. This track appeared on Mitchell’s 1970 album release Ladies Of The Canyon, and was previously teased on Lana Del Rey’s Instagram back in 2017.” 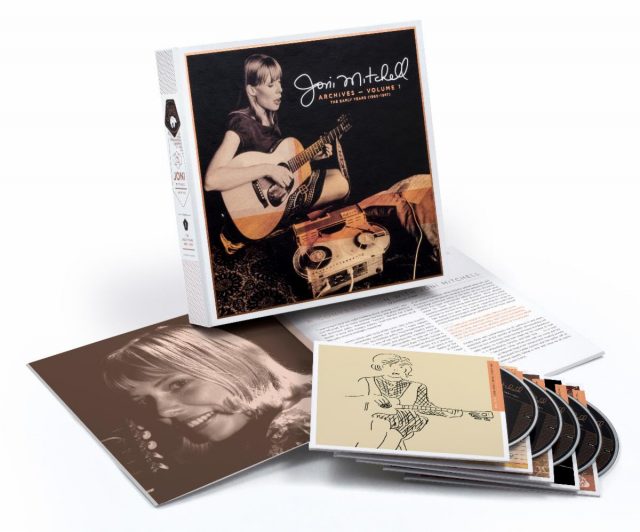 “A Record Of My Changes” – Michael’s Birthday Tape: North Carolina (May 1967)

Side One: First Set