An extensive forthcoming six-CD boxset collection of legendary guitarist Frank Zappa’s 1981 live Halloween residency at New York’s Palladium, Halloween ’81 will be released October 2, via Zappa Records/UMe. According to a press release, “For the first-time ever, Zappa’s historic October 31 Halloween night concerts and the closing November 1 show recorded live at The Palladium in 1981 will be released as a gigantic six-disc box set featuring 78 unreleased live tracks totaling more than seven hours of live performances from three complete concerts.”

The Zappa Family Trust previously released the 3-disc set Halloween ’77, which came complete with a total of 158 songs and a Frank Zappa Halloween costume and mask. This time around, according to the aforementioned press release, the thoroughly comprehensive 6-disc set will include, “The specially-designed costume box will include a Count Frankula mask along with a red and black cape so fans can dress like vampire Frank Zappa for Halloween or display alongside their FRANKenZAPPA mask and gloves from last year’s Halloween 73 box or the retro mask and costume of the maestro himself from the inaugural release. Fully authorized by the Zappa Trust and produced by Ahmet Zappa and Zappa Vaultmeister Joe Travers, the concerts have been newly mixed from the original Ampex 456 2-inch 24-track analog tape masters by Craig Parker Adams in 2020. This king-size offering also includes a 40-page booklet with rare photos from the event…”

The boxset also includes a rare live recording of the previously unreleased Halloween themed track “I’m The Slime” which was performed at the November 1 closing show. The recording is vibrant and the comically smooth groove goes over well with its plucky synth keys and playful additional instrumentation. Zappa, whose love for Halloween is evidently on full display here, controls the crowd with his majestic fervor. To listen to Frank Zappa’s live performance of “I’m The Slime” stream below, via YouTube.

As previously reported in Rolling Stone, Zappa’s keyboardist Robert Martin speaks on Zappa’s passion to perform laid out in the liner notes, saying:

“All in all, the elements of sonic exploration and social commentary that run through all of Frank’s albums and tours are especially well represented in this release, perhaps amplified by the surreal aspect of Halloween and the openness of the crowd to participate even more fully in the ‘anything can happen’ experimental atmosphere that Frank lived in and personified.”

A unique anecdote about the Halloween ’81 live performance, is that this live show was captured by a fairly new music network at the time. The press release explains this point when, “In addition to recording all shows with a professional mobile rig and filming the Halloween night festivities for future releases, the midnight concert was to be the first live simulcast in cable history, broadcasting via satellite over the radio and on a recently launched music channel called MTV.”

Pre-orders are currently available for the extensive box set, here. 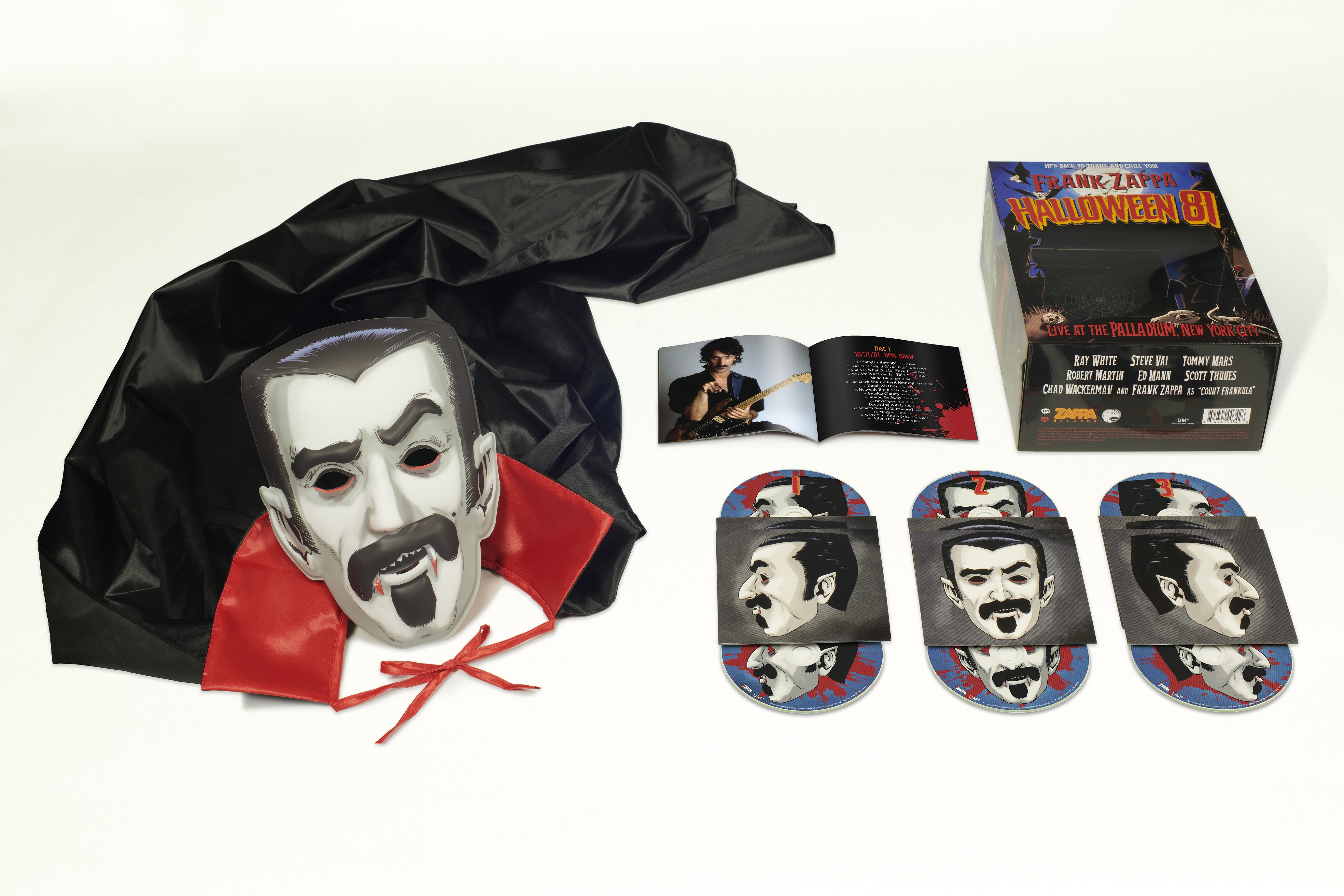