Singer-songwriter Andrew McMahon, formerly of Orange County, California-based rock band Something Corporate, is celebrating the 15th anniversary of his seminal breakout 2005 debut release, Everything in Transit, via Maverick, with pop rock/power pop group, Jack’s Mannequin. To commemorate the release, McMahon announced this past Tuesday, June 16, according to a press release “…two special drive-in concerts in Anaheim at the City National Grove on July 10th and 11th. The all-ages shows will be in celebration of the 15th Anniversary of the Jack’s Mannequin album Everything in Transit, which he will play from start to finish plus other popular songs from The Wilderness and Something Corporate.”

McMahon as the lead vocalist/pianist for his initial collective, Something Corporate, actively recorded and toured between 1998-2004 with the release of three full length studio albums: 2000’s Ready…Break, 2002’s Leaving through The Window and 2003’s North. Something Corporate went on a hiatus from 2004-2009, briefly reuniting in 2010 for touring and their greatest hits release, breaking away on amicable terms no longer releasing any new material.

The hiatus birthed Jack’s Mannequin, a project which started out as McMahon branching out on his own with the freedom to creatively release solo work. According to the aforementioned press release, “Everything in Transit was the critically acclaimed debut album for Jack’s Mannequin released in 2005.  While recording the album, McMahon was diagnosed with Leukemia at age 22.  He eventually made a full recovery and headed back on the road a few months after being in remission, which led to the lead single, ‘Dark Blue,’ becoming  certified Gold.” Jack’s Mannequin consisted of McMahon (lead vocals), Bobby “Raw” Anderson (lead guitar/backing vocals), Jay McMillan (drums), Mikey “The Kid” Wagner (bass) and Zac Clark (keyboards). The collective released two more full length studio albums after Everything in Transit, 2008’s The Glass Passenger and 2011’s People and Things, via Sire. McMahon retired the name in 2012 and has since recorded, under the solo moniker, his indie pop project 2016’s Andrew McMahon in the Wilderness.

According to the aforementioned press release, McMahon is elated and enthusiastic about the forthcoming two show drive-in concert performances, amidst the ongoing coronavirus pandemic, saying:

“I’m thrilled to announce that I’ll be performing 2 live shows at the City National Grove of Anaheim on July 10 and 11 to kick off Drive-In OC. In a time where shows are scarce, this is an opportunity for us to gather safely and celebrate live music under the stars. It also felt like the perfect time to celebrate the 15th Anniversary of ‘Everything In Transit’, which my band and I will be playing front-to-back, in addition to other favorite songs from The Wilderness and Something Corporate.“

The aforementioned press release furthers that, “The safety and wellness of guests and staff is the top priority for City National Grove of Anaheim’s Drive-In OC.  Every aspect of the event has been engineered to provide the most contactless experience possible, including entry, ticketing, concessions, and restrooms.  Nederlander Concerts is working closely with both Orange County and the City of Anaheim to ensure Drive-In OC meets or exceeds all recommended standards set forth by the CDC and State of California. ”

To inquire about the venue and purchase tickets, visit here. 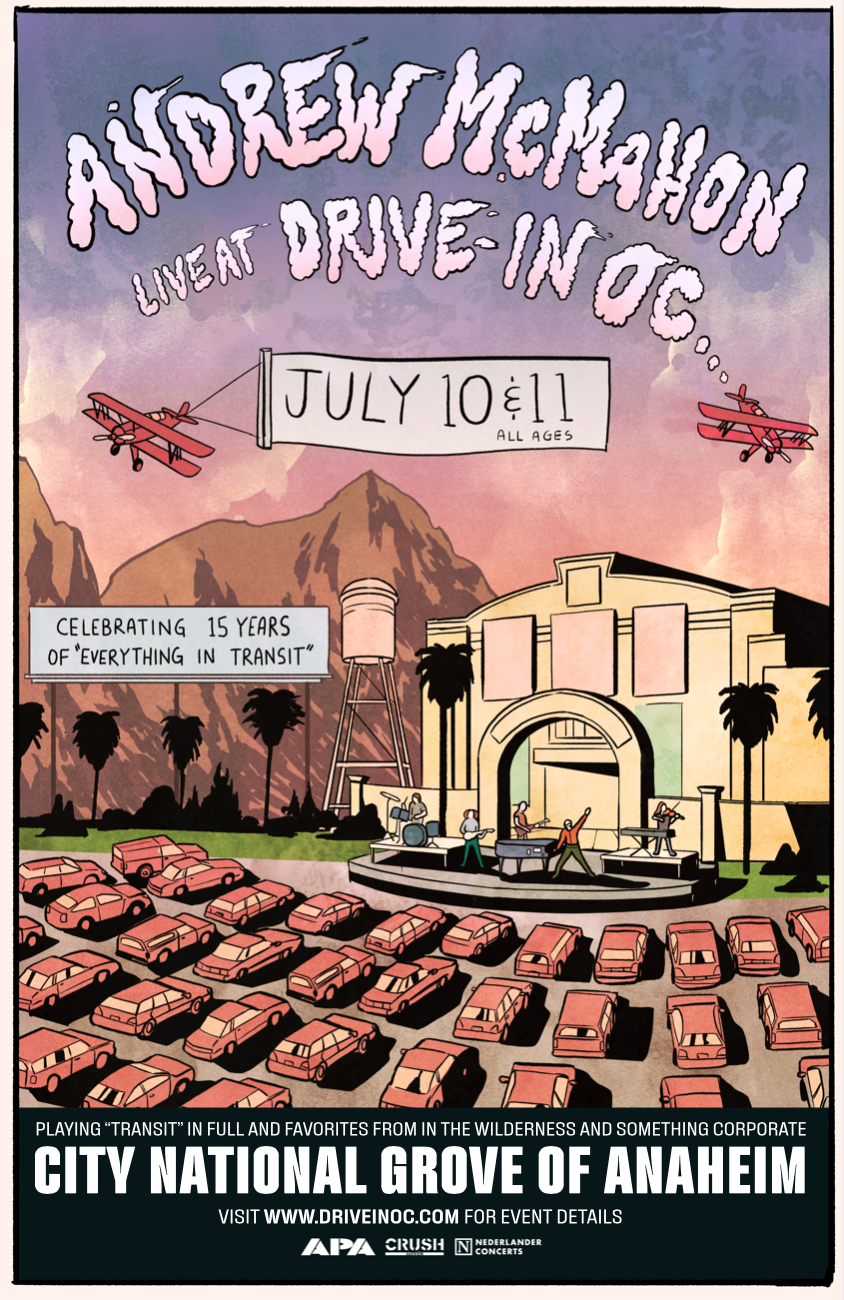