The eclectic Canadian/American pairing of DJ A-Trak and Armand Van Helden, respectively, bring forth a return of the house/nu-disco duo Duck Sauce. The duo have recently premiered their latest track “Smiley Face” as of Friday, January 31 a funky throwback disco-tinged groove that would mark the duo’s first new song in nearly six years. According to Pitchfork, “Smiley Face” is the duo’s “…first piece of new music since the release of their full-length album Quack back in 2014.”

The track “Smiley Face” bursts onto the scene with an upbeat and flamboyant boisterous piece of funky house production. The release of the latest Duck Sauce track coincides with an accompanied music video that is simple and straightforward. Simply the track is played over a small vinyl player surrounding throwback accessories like a flip phone, antenna headphones, a peace medallion, an 8 track tape and a collection of toys that also includes an array of stylish plastic duck figures. As for the song itself, as previously reported in Rolling Stone, “The track is a burst of pure dance floor joy, with euphoric vocal samples gliding across a quick-stepping groove. Over the course of the song, Duck Sauce repeatedly build and drop the beat, pushing ‘Smiley Face’ into bigger and bigger moments of delirium each time.”

Duck Face debuted back in 2009 with a series of EPs released under the Fool’s Gold music imprint. The aforementioned Rolling Stone article furthers that the producer/songwriting/turntablist Duck Face”…scored a viral hit the following year with ‘Barbra Streisand,’ which boasted a cameo-filled video featuring Kanye West, Pharrell, Diplo, Questlove, Ezra Koenig, Chromeo, DJ Premier, André 3000 and more. The duo released a pair of EPs, Greatest Hits in 2010 and Duck Droppings in 2014, plus the 2013 mixtape, Duck Tape. Their first, and so far only, album, Quack arrived in 2014.”

According to a press release, the duo’s only planned US performance will be their inclusion at this year’s Coachella music festival. 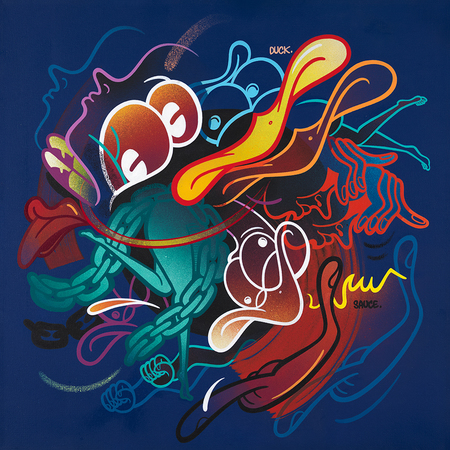 To listen to “Smiley Face” stream below, via YouTube.