The illustriously stacked who’s who lineup that consists of the latest announced performers for Punk Rock Bowling 2020, in Las Vegas, is sure to appease its core audience of the long running festival. According to Consequence of Sound, the festival’s all-encompassing spectrum of hardcore to punk rock music this year is being “…headlined by Madness, Circle Jerks, and Cock Sparrer. The 22nd iteration of the fest, which combines the recreation of bowling and punk-rock performances, takes place Memorial Day weekend (May 23rd-25th) in downtown Las Vegas.”

Performers joining the headline of next year’s Punk Rock Bowling festival include an impressive array of bands including The Mighty Mighty Bosstones, The Adicts, Propaghandi, Stiff Little Fingers, Anti-Flag, Municipal Waste, The Lawrence Arms, and Ho9909, among a plethora of others. Punk Rock Bowling is a festival that has become renowned for bringing together talent that make rare appearances and/or surprise reunions. The aforementioned Consequence of Sound article furthers that this event marks Hermosa Beach, California-based punk rock staples Circle Jerks’ first performance in over a decade, with the band’s core members Keith Morris, Greg Hetson and Zander Schloss. As previously reported by Brooklyn Vegan, “Punk icons Circle Jerks are reforming for the 40th anniversary of their classic album Group Sex, having announced an appearance at the 2020 edition of Punk Rock Bowling.”

The Consequence of Sound article concludes with “In addition to Circle Jerks, the fest promises rare sets from Lunachicks, Rose Tattoo, and AVAIL.” Punk Rock Bowling festival co-founder Mark Stern had this to say about the impact of the long-running live event and what it means to facilitate the readily convenient venue for fans attending, saying:

“We strive to bring in bands that don’t tour constantly, as well as new reunions,” Punk Rock Bowling co-founder Mark Stern said in a press release. “It’s a bit different than other festivals in that respect. … Once you get into Vegas and get downtown, you never leave. All of our venues are within walking distance. You walk out, your hotel’s right next door to the venue. You can walk two blocks and walk into any of the other events. Everything is right there.” 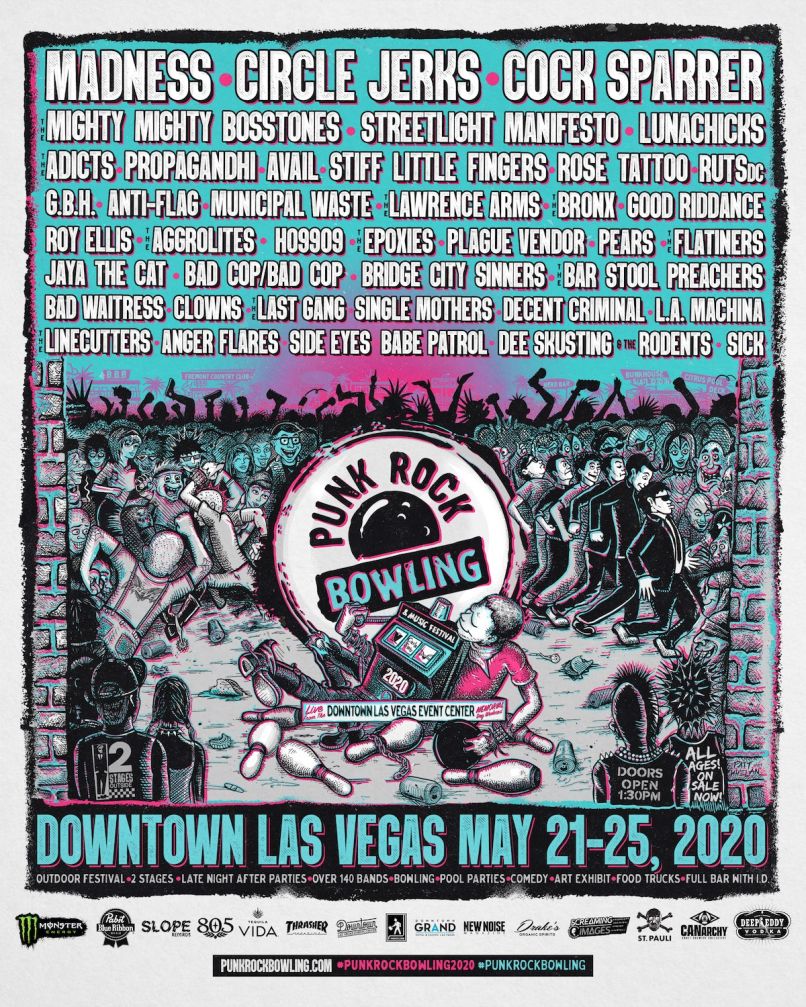 For more information regarding the festival and all it entails, visit the official website here.