In 1985, the Soviet Union had other plans in mind in regards to warfare and not in in the direct sense, but rather an indirect assault on the Western World’s pop culture ideology and more specifically the American recording industry. According to a factually humorous Spin article, a list of Soviet Union-era banned recording acts are released to the public for the first time. The aforementioned article opens with commentary on how “Putin wouldn’t want you to see this list. It proves that his beloved Soviets were completely terrified of the West’s ‘violent,’ ‘fascist,’ ‘racist,’ and, dare we say, ‘erotic’ music.”

List of bands/artist banned on Russian radios + the reason why. Special mention to Julio Iglesias pic.twitter.com/3dupVt6wki

The highly offensive list, circa the mid-’80s, according to the Russian government in regards to American pop music has an interesting and varied list of acts and explanations on why these acts were banned at the time. The list includes the sultry voices of Donna Summer, Julio Iglesias and Tina Turner, the head-scratchingly ‘offensive’ alternative band the Talking Heads, to the more obvious rebelious music of AC/DC and Black Sabbath plus many more. The list has some direct reasons listed as simply put “sex” and “violence” to more broadly reaching as to Donna Summer’s “eroticism,” Talking Heads’ “Myth of Soviet military danger” or Pink Floyd’s “Interfering the Foreign Policy of USSR (Afghanistan).”

The aforementioned Spin article goes on to elaborate on possible scenarios to these cases “The year is 1985, the Cold War is in full swing and Donna Summer’s eroticism is totally a weapon of war. Don’t believe us? Believe Komsomol, the Youth Wing of the Communist Party, who put together this blacklist of bands to be banned from proletariat society….The purported original Russian-language list, via Boing Boing opens with:

‘We recommend using these findings to more strongly control what happens in discoteks.'” 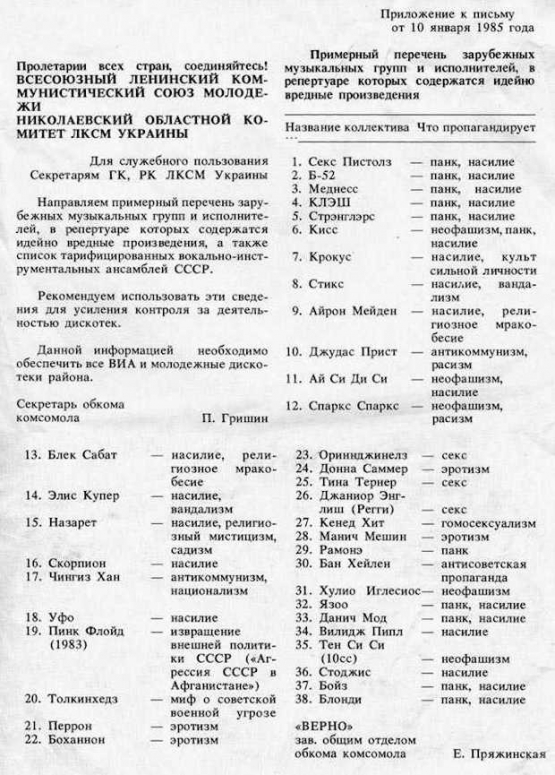 Referenced in the Spin article, according to The Scotsman a “Dr Andrei Rogatchevski, a lecturer in Russian studies at Glasgow University, said: “The authorities didn’t like references to sex because they disliked any emotions they could not control.

‘Anyone who was religious in any way was guilty of ‘religious obscurantism’. It didn’t matter whether you believed in God or the devil or black magic or whatever. The only thing you were supposed to believe in was the party. They didn’t like violent lyrics because they might disturb Soviet order. And as for any reference to fascism, that caused the deaths of millions of people.'”