Old school grunge rock band Flipper has announced they will be going on a 40th anniversary tour. The group, which began in 1979, has been releasing music since before many in the industry today were born and is sure to blow fans away on this next tour. Flipper is known for their erratic instrumental style and vocal performances. The band made a name for themselves throughout the 1980s with albums such as Album – Generic Flipper, which had some of the group’s most well known work. The song “Sex Bomb” is the most famous song from the album, a nearly eight minute long song that embodies everything fans of the group have come to love. The track combines Flipper’s usual grunge-filled sound with a series of different instruments and sounds in order to make the track more and more chaotic as it progresses. It is one of the most unique songs the band has made to this day and will hopefully be played at the upcoming tour.

Accompanying founding members Ted Falconi and Steve DePace will be Rachel Thoele and vocalist David Yow. Yow will be the main singer for the group for this series of shows. The tour will begin in April of this year in Los Angeles; taking the group on a series of shows along the West coast. After a month long break, Flipper will perform in Las Vegas at the end of May alongside the band Killing Joke for that group’s show at the Punk Rock Bowling Festival. Following that, the group has a fairly consist schedule of shows across North America, breaking out of the United States for one night to perform at the Astoria in Vancouver, Canada. The tour will conclude by the end of July in Venture, California. A full list of the tour dates can be found below. 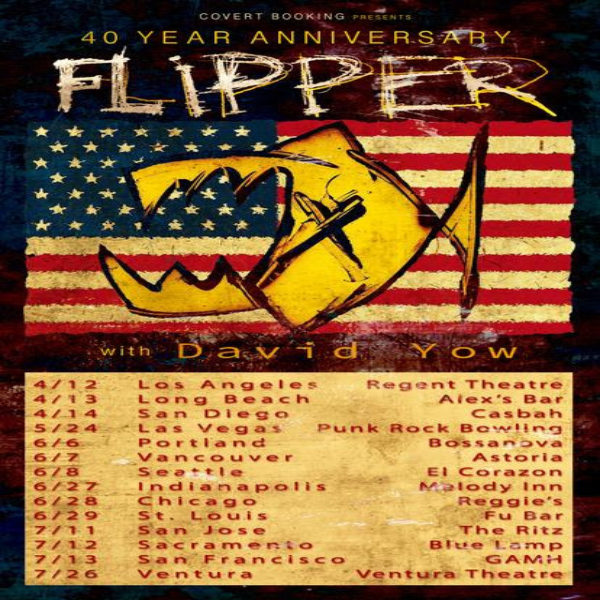