The Sea.Hear.Now Music and Surf Festival has announced the musical performers for its upcoming festival. Sea.Hear.Now is a unique type of festival, as it was founded on the basis of combining people’s love of both surfing and music. With its inaugural event last year, the festival emphasized taking care of our oceans and brought to light the issues facing the beaches on a daily basis. A big portion of that effort went towards raising awareness of all the plastic waste that ends up littering the oceans and providing reusable drinking containers to cut down on plastic use at the event. A growing trend in up and coming festivals these days is to place an emphasis on the environment, and Sea.Hear.Now is helping show the way. This year the musical acts performing will include The Lumineers, Sharon Van Etten and Dropkick Murphys. The festival itself will take place on September 21-22.

The Lumineers broke through with one of the most well known tracks of the year in 2012; the song being their chart smashing single “Ho Hey.” The track was a part of the group’s debut album, the self titled The Lumineers project. That year the band became a household name, launching themselves to global fame simply off of their debut. The band returned with their sophomore album, Cleopatra, in 2016. The project was spearheaded by the track “Ophelia,” which is one of the catchiest songs the group has put forth so far. Their set at the festival is sure to be one of the best performances of the weekend.

Sharon Van Etten is another musician performing at Sea.Hear.Now, with the singer having just released a new album this past month. Remind Me Tomorrow, is the newest album by folk-influenced pop singer Van Etten, who broke out onto the scene a little over a decade ago and has been releasing music ever since. Van Etten is well known for her song “Every Time the Sun Comes Up,” a slow ballad showcasing the singer’s luxurious voice and heavily folk-inspired artistic style. Her new album features a slightly more electronic production style with the songs “Comeback Kid” and “Seventeen” being prime examples of this. All fans of Van Etten’s music should try to see her perform at the Sea.Hear.Now festival.

Dropkick Murphys, one of the more unique punk rock bands around today, will also be making an appearance at the festival. Formed in the 1990s, Dropkick Murphys are a Celtic-inspired punk rock band that combine the two seemingly different genres. The group has been making major waves in the music industry since 2005 with the release of their massive hit “I’m Shipping Up To Boston.” This was the song that helped truly bring the group into the mainstream and paved the way for their success since. Fans of punk rock who have not yet heard of Dropkick Murphys should be sure check out their set to see the group’s unique blend of Celtic and punk influences. 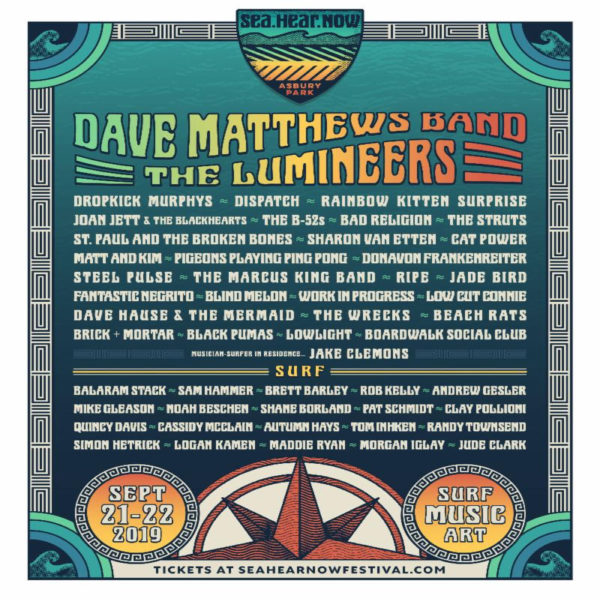