The Bash is a brand new music and craft beer festival that is set to tour the United States this spring. The touring festival is the brain child of punk rock legends Rancid, who have collaborated with event producers and promoters, Synergy Global Entertainment. Rock fans and beer lovers can rejoice, as The Bash will be making its debut very soon on May 11 in Phoenix, Arizona. With a total of seven stops, the festival will also hit states like New Jersey and Washington, before ending in Sacramento, California on June 16. Check out the full list of dates and locations below. 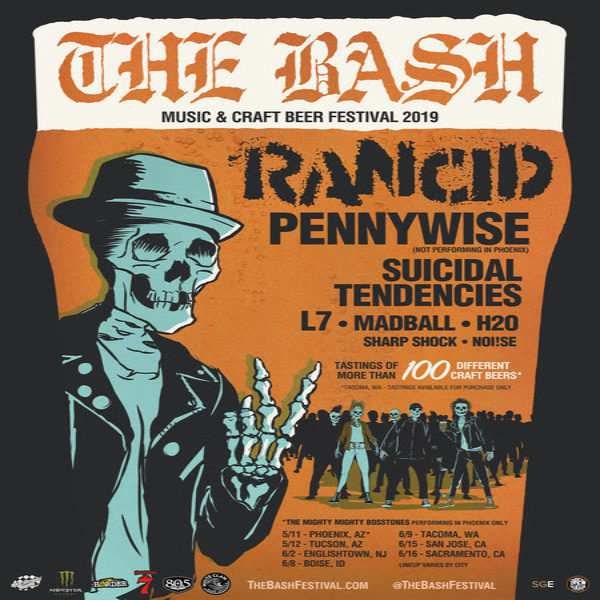 A huge part of the festival is the wide selection of craft beers that will be available for tasting to those of age. The Bash promises a selection of over 100 brands from all over the country, with each stop of the festival hosting several local favorites. Some prominent breweries that will be present at most of the festival’s stops are Modern Times, Ska Brewing, The Shop, and Stone Brewing. Tickets for The Bash Music & Craft Beer Festival will go on sale on February 22 and tickets can be purchased via their website.

The lineups for all of the tour’s stops are curated by Rancid themselves. Every stop will feature Rancid themselves, California’s Pennywise, thrash and punk favorites Suicidal Tendencies, and L7. Boston Ska punk band The Mighty Mighty Bosstones will be making their only appearance at Phoenix, Arizona, while others like H20, Madball, No!se, and Sharp Shock will be featured on selected dates. Creators of the festival Rancid are already excited, with Tim Armstrong stating that he is “looking forward to playing with some of [his] favorite bands in the world.”