The Lollapalooza Festival has announced its upcoming Berlin 2019 lineup. This year will be the fifth edition of the Lollapalooza Berlin Festival and will feature performances from the band Kings of Leon and singer Billie Eilish. There will also be a performance by electronic music veterans Underworld. This year, Lollapalooza Berlin will take place on September 7th and 8th at the Olympic Stadium and Park in Berlin. One stage at this year’s festival will also be curated by producer Martin Garrix and feature a variety of acts from his STMPD record label.

Kings of Leon are one of the most well known rock groups of the 2000s, with their album Only By The Night taking over the airwaves in 2008. The songs “Sex on Fire” and “Use Somebody” were massive hits, and the group established themselves as a global force that year. Since then, the group has released three more albums, most recently the WALLS record in 2016. That project was supported by the song “Waste a Moment” and the title track “WALLS.” Since then, the group has been touring and performing at various festivals around the globe. Their headlining set at Lollapalooza Berlin will be one of the highlights of the weekend.

Another major performer coming the Lollapalooza Berlin is the up and coming singer Billie Eilish. Over the past year, Eilish has gained a massive fan base thanks to her artistic style and the breakout hits “ocean eyes” and “lovely.” These songs and others have made Eilish one of the largest new performers in pop music. Her debut EP, dont smile at me, was released at the end of 2017 and featured some of the singer’s most best work so far. Over the past year, Eilish has released numerous singles and begun performing at festivals all over. Her set will definitely be one to see.

The electronic music group Underworld is also slated to perform at Lollapalooza Berlin. The group has been releasing music and performing at festivals since the 1990s, putting on amazing shows over the past two decades. Now they are heading to Germany to perform. Known mainly for the hit song “Born Slippy” in the late 1990s, the group has also made the songs “Cowgirl” and “Jumbo.” Their success in the early years of Underworld have let the group spend their time since then perfecting their craft and making another 7 full albums. Fans of their music will have to be sure to see their set at Lollapalooza. 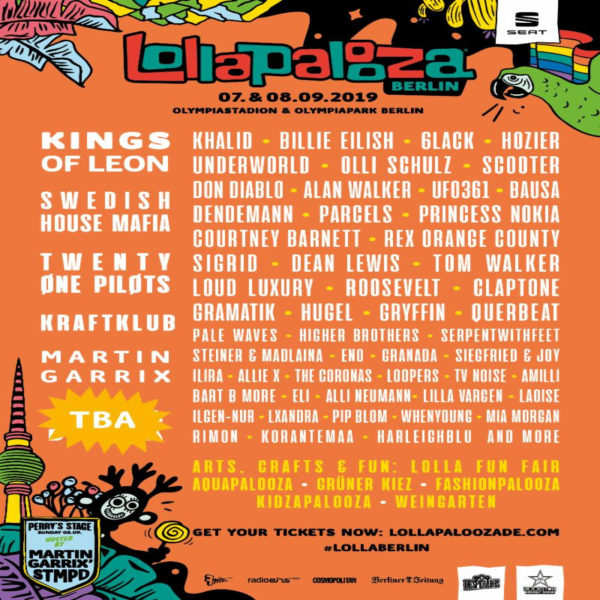