After hinting at a new album at Lollapalooza in Chicago last year, indie-rock favorites Vampire Weekend are set to promote that very album titled Father of the Bride this year. The band have just announced an extensive summer tour that sees them play more than 30 venues over the course of a few months. Their North American tour will begin on May 17 at the Hangout Music Festival in Gulf Shores, Alabama and end on October 8, at the gorgeous Red Rocks Amphitheater in Denver, Colorado. 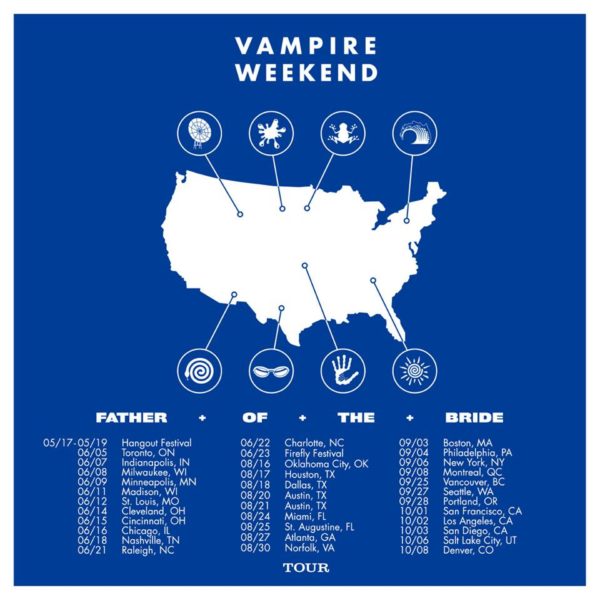 Fans of the band are in for a treat, as the Grammy Award-winning group will be headlining iconic venues across the nation such as Madison Square Garden in New York City, New York on September 6, and Los Angeles, California’s Hollywood Bowl on October 2. They will also be playing at major festivals like Hangout Festival and Firefly Festival in Dover, Delaware. Tickets for their 2019 tour will be on sale beginning on February 8 through Live Nation.

Father of the Brideis Vampire Weekend’s fourth studio album that is set for a Spring 2019 release. It will be the first album the band has put forth in almost six years. In teasing fans about its release, frontman Ezra Koenig released two songs titled “Harmony Hall” and “2021” and shared a message to fans on his Instagram account to thank them for their patience and to detail the creative process behind the band’s latest work. Read Koenig’s message to fans below.

Father of the Bride Tour Dates: