After the success of their inaugural year of musical performances, the X Games have announced the musical lineup for X Games Minneapolis 2019, the world’s top extreme sports event. The artists will perform inside downtown Minneapolis’ iconic venue, The Amory, from August 1st through the 4th.

The East Coast rap group Wu-Tang Clan are riding off the wave of celebrating the 25th anniversary of their album Enter the Wu-Tang (36 Chambers), an album that continues to be celebrating in the hip-hop community. Since then, the group has released four platinum and gold full length plays. Fans will be left intrigued what songs the rap group will perform from their large discography.

Grammy-awarding winning producer Diplo is always keeping himself busy from being one of the most requested producers and DJs in the world to managing his own record label, Mad Decent. This year alone, he released a collaborative EP entitled Mountains with Sia and Labrinth under the guise of supergroup LSD. It would be a shock if Diplo brought out the group and performed songs off the EP, or any new music the group decides to make in the upcoming year.

Rapper P.O.S announced earlier this month that he would be doing a 10 year anniversary tour for his third studio album Never Better. He will also be releasing a vinyl reissue for the record on February 1st next year, the first night of his tour. The entire album was one of his most well-received projects by music critics due to its focus on politics around 2009. The 10th-anniversary reissue will include four bonus tracks, two of which are live performances. Let’s see if P.O.S will decide to perform songs off the album during his set.

Tickets for the 2019 X Games Minneapolis have gone on sale on the official X Games website, with general admissions tickets starting at $50. There are also VIP packages, one-day and three-day experiences and other music options offered at this time. 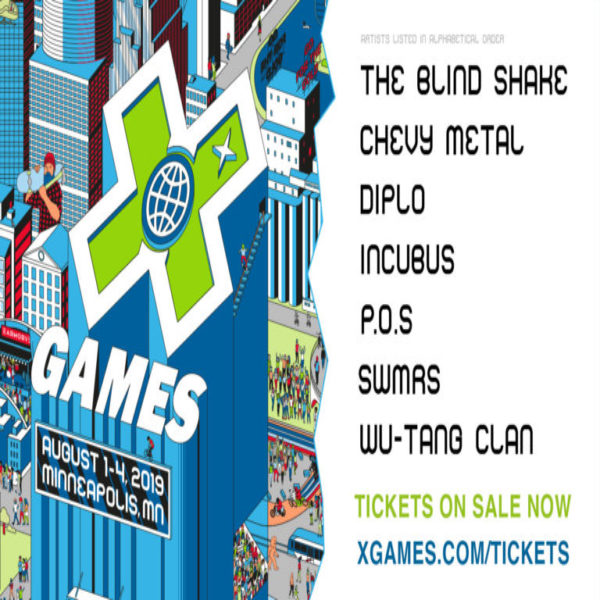