Ozzy Osbourne is nowhere near his final tour, even with news circulating about his retirement. Osbourne recently set the record straight, “People have gotten that all wrong, the tour should have been the Ozzy Osbourne Slowing Down Tour.  I’ll still tour, but not as extensively like I have been for the last 50 years. I mean, I have grandchildren now and I’m 70 years old and I don’t want to be found dead in a hotel room somewhere. I’m going to do it at a more leisurely pace and do some shows in Vegas … but I’ll never stop. The whole lifestyle I have lived, it has all come down to the fact that there are people who want to hear me and as long as they want to hear me, I’m there.” 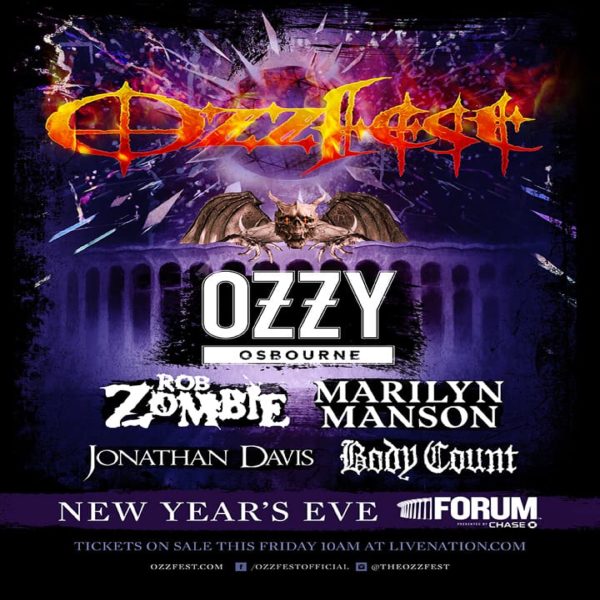 The music icon is getting ready to ring in the New Year with fans at Ozzfest at The Forum on December 31st. While the legendary artist conveyed his lack of enthusiasm for the Christmas holiday, “I’d been telling Sharon for years I want to work through Christmas because I don’t like it and it’s a waste of time,” the 70-year-old rocker told his wife.

Osbourne is excited for his New Years show, “We’re going in the day before to rehearse, work out the time and figure out which song I’ll be doing so I can stop to ring it in,” he said. “To be honest with you, I’m really looking forward to it. I think it will be a lot of fun. I prefer New Year’s because it’s one day, one night and then it’s done! I hope people come and have a good time, that’s what I’m about. I don’t care if it’s New Year’s Eve or whatever, as long as people come and go ‘Wow, that was a good way to bring in the New Year’ or ‘Wow that was really a great concert.’”

The show will kick off at 2:30 p.m. with an outdoor party that will include sets by Zakk Sabbath, Devildriver and Wednesday 13 before the festivities move indoors at 6 p.m. where Ozzfest alumni Rob Zombie, Marilyn Manson, Jonathan Davis of Korn and Ozzfest newbies Body Count featuring Ice-T will take the stage. The evening will wrap up with Osbourne serving as the master of ceremonies and he is very much looking forward to being the guy who gets to yell “Happy New Year!” at midnight.