Bogota’s Estereo Picnic festival has announced the lineup for its 2019 shows. As one of Colombia’s largest music festivals, Estereo Picnic has strove to bring the best acts it can to Colombia since 2010. The festival began mainly as a way to showcase Colombian musicians, but expanded its reach to the international community in 2013 and began growing rapidly. The festival had over 60,000 attendees by 2016, showcasing just how large the music community of Bogota had grown to be. The headliners for the 2019 show include legendary rapper Kendrick Lamar, electronic group The Prodigy and singer St. Vincent. With some of its most powerful acts yet, the next Estereo Festival is set to be one of the largest events of the year in Colombia.

Kendrick Lamar is finishing up one of his most successful years in the music industry. The rapper was recently revealed to be nominated for 8 grammys, an incredible number of nominations for a year in which he did not even release a full solo album. The nominations come for Lamar’s work on Black Panther The Album Music From And Inspired By, which he worked on with a variety of other artists. While Kendrick has been nominated previously for his music, he has yet to win the coveted award; 2019 appears to be Lamar’s year, as he is the most nominated artist overall. The soundtrack spawned hit songs such as “All The Stars” and “King’s Dead,” both of which feature Lamar and many of his Top Dawg Entertainment associates. “All The Stars” was nominated for 3 categories, including song of the year and record of the year.

The Prodigy is an English electronic group, well known for their songs “Breathe” and “Smack My Bitch Up.” The high energy electronic production of the group is combined with a variety of different vocal presences. Beginning in the 1990s, The Prodigy is credited with paving the way for much of the electronic music that took hold during that time. The group’s most recent album, No Tourists, was released earlier this year and gave fans songs such as “Need Some1” and “Light Up the Sky.” Both of these tracks build upon the high octane performances the band is known for and deliver a unique listening experience. The songs on No Tourists are some of the more intense electronic music today, and prove that this group is still finding their own place in the music industry even over 20 years after they began.

St. Vincent is the stage name for American singer songwriter Anne Clark. Clark is known for her unique style of music, blending soft rock and electropop influences into something that other artists would have never experimented with. Her song “Cruel” is the epitome of this distinct sound, with production drawing upon both heavy pop and indie music. St. Vincent’s most recent release was in October of this year, with the album MassEducation. The album was a remix of her 2017 release of the same name, with these new versions being piano based remixes of her songs. Overall, the lineup for 2019’s Estereo Picnic is sure to amaze fans of any genre and provide a unique listening experience. 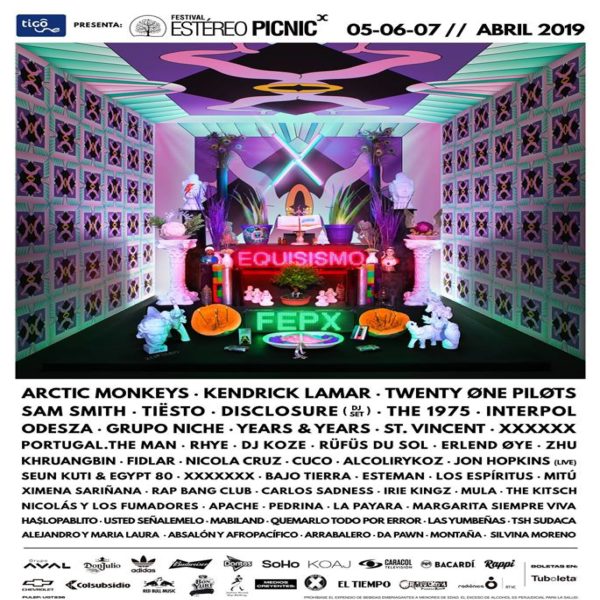