Chicago Open Air Announces 2019 Lineup Featuring Ghost, System of a Down and Tool

The city of Chicago has provided yet another great set of shows. Chicago Open Air has revealed their 2019 lineup featuring some heavy hitters in the metal and rock music genres. Ghost, System of a Down, and Tool are set to perform at the two-day festival set to take place at SeatGeek Stadium (formerly Toyota Park) in Bridgeview, IL May 18th and 19th. Other performers include  The Prodigy, Gojira, Beartooth, Code Orange, Knocked Loose, In This Moment, and Vein just to name a few.
Frontwoman of In This Moment, Maria Brink, says, “I can’t even begin to express how excited we are to be playing Chicago Open Air Presents. We had such a blast last time! Tool, The Prodigy, and System Of A Down, that’s insane and such a powerful lineup. We feel blessed to be a part of it all…”
Passes for the two-day event will go on sale Friday, December 14th at noon CST with two-day passes starting at $180 and VIP Passes starting at $430. Click here to purchase passes.

After taking a hiatus this year, 2019 will mark the festivals third, with previous performers including Ozzy Osbourne, KISS, Slayer, Rammstein, and Slipknot.

Festival headliners Tool are clearly hitting the festival circuit next year. The legendary band was recently announced to play the Epicenter festival alongside the Foo Fighters and Mastodon, and Florida’s Welcome to Rockville with Rob Zombie, Korn, and Evanescence. System of a Down was recently announced to play the Sonic Temple Festival with Ghost, Foo Fighters and Disturbed in Columbus, OH. 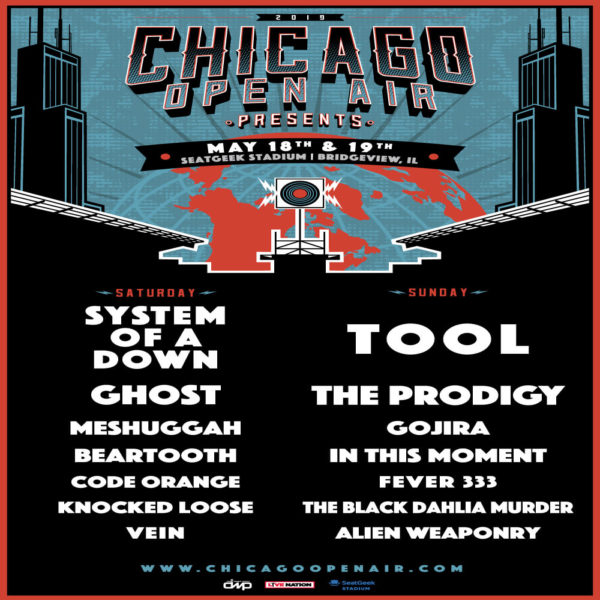