Mustached, rock and roller Jesse Hughes and special guests put together a hit list of cover songs in their new album, Pigeons of Shit Metal which contains ten tracks – all covers from such acclaimed heavy metal and alternative bands such as Guns N Roses, AC/DC, the Ramones, the Pixies, Love and Rockets, Queens of the Stone Age, the Distillers and more.

This new album is a breath of fresh air after the band dealt with a massive  shooting tragedy in Paris, France back in November 2015. Eagles of Death Metal were performing at the Bataclan in Paris when three gunmen burst in, firing indiscriminately until ultimately detonating individual vests.

Hughes mentioned it had been quite an emotional experience for him when they returned to Paris in 2017 to perform a surprise two-song set to mark the anniversary of the Bataclan attacks. He felt “a million different emotions, but all of them good.” With Dave Catching, the group’s guitarist, Hughes played two songs including “Save a Prayer,” which happens to be the last song the band played before the attack began two years ago. The pair closed their set by throwing white flowers toward the audience.

“This is just a testament to the resolve of a community that is determined not to let the bad guys win.” Hughes managed to meet French President Emmanuel Macron at the event. The two were reported to have an emotional meeting in which Macron told the singer, “We’re here for you.” Hughes told the President, “the French people have really made it possible for us to come back to life. So thank you very much.”

The limited edition vinyl features artwork by Josh Homme and is available in colors such as glow-in-the dark, neon pink, and cyan blue. Pre-order Pigeons of Shit Metal now. The limited edition LP comes in a special reverse board jacket along with a full color inner sleeve containing artwork and linear notes helping to explain everything just in case you’re confused. The run is limited to 500 copies. Ordering both records ensures that you will receive two different colored vinyl LPs chosen at random. 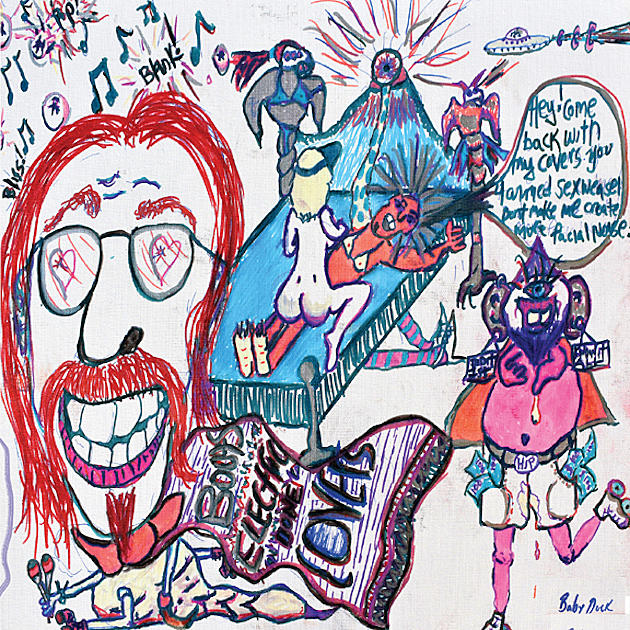