Crossover thrash band Iron Reagan have announced a new EP entitled Dark Days Ahead, which is set to be released on October 12 off Pop Wig Records. The third track off the EP called “Patronizer” was released on Pop Wig Records’ SoundCloud account following this announcement.

“A lot of these tracks were written during the recording sessions for Crossover Ministry but didn’t fit with that album,” Tony Foresta, the group’s frontman told The PRP. “We’ve been friends with the Trapped Under Ice guys for years and are stoked to get these tracks out on their label.”

Dark Days Ahead shares its name with the track released by the band back in April of 2017, which served as part of the Our First 100 Days music series. This series hosted a song release each day by a variety of metal and punk groups for the first 100 days of Donald Trump’s presidency. Donations from the project went toward causes in support of the environment, reproductive rights, immigration and the LGBTQ+ community.

This song, which serves as a critique of the Trump presidency and campaign, will also be included as part of the upcoming EP. In 2017 Foresta, who is also the lead vocalist of Virginia thrash band Municipal Waste, attracted controversy for having band t-shirts which featured Trump blowing shooting his brains out on the front, with the caption :”The Only Walls We Build Are Walls of Death,” on the back.

“I’ve been reading some of the comments from people that are “shocked” that we would say something bad about Trump. We talked about killing George Bush on our first freaking album!” Foresta stated in an interview with Noisey regarding the controversy. “People need to read the lyrics of the bands they listen to before they get butthurt about the things they have to say.”

“We’re making so much money off of it that we might actually turn into Republicans!”Foresta joked regarding the shirts. “Okay, not really ,but it’s selling pretty good. A lot of people don’t like that guy.”

Outside of the political realm the band have just finished up their spring tour earlier this year, which began in their hometown of Richmond, Virginia back in April. This short stint saw the band perform across a few venues along the east coast.

The band will also be performing at the inaugural Knotfest, in Bogota, Colombia, alongside Judas Priest, Revocation and Slip Knot. This event is scheduled to take place two-weeks after the band releases the upcoming EP.

Prior to their spring tour the band released a music video for their track “Take The Fall,” which was part of their split-LP with death metal group Gatecreeper. The eclectic video displays scenes of nuns riding on motorcycles and skateboarding alongside various other acts of debauchery.

Check out the tracklist for the Dark Days Ahead EP below: 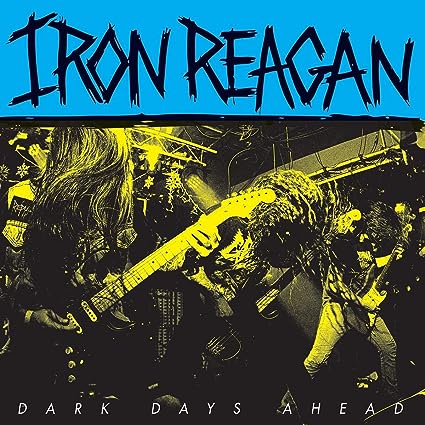 1. Authority
2. Dark Days Ahead
3. Patronizer
4. The Devastation
5. Watch You Die