Death metal outfit The Black Dahlia Murder have announced a new fall tour, called the Infinite Bringers of the Night Tour, which will begin on November 24 at Oddbody’s in Dayton Ohio. The 16-date tour in support of their 2017 album Nightbringers, will go across the US, making stops at Los Angeles’ Decibel Metal And Beer Fest along the way.

This tour will feature support from Power Trip, Pig Destroyer, Khemmis, Ghoul, Gost, Havok, Midnight, Skeletal Remains, and Devourment. So far Gost and Skeletal remains are scheduled for every single stop on this current tour.

“Yes! The time has finally come and we are able to announce one of the coolest tours we have ever been a part of!  As you can imagine, I had quite a hand in assembling the lineup here, and I am so proud and thrilled at what we’ve been able to construct,” the band’s front-man Trevor Strnad stated in a press release. “We have surrounded ourselves with some insane regional lineups featuring many of my favorite bands in the underground right now, to see us to California and back.”

The Black Dahlia Murder, have been busy performing since the release of Nightbringers back in October. From May to June they held a spring tour in promotion of the album simply called The Nightbringers tour, which saw support from groups such as White Chapel and Homewrecker.

Power Trip and Pig Destroyer, who are playing at select stops on this tour, will also be joining the band at the Decibel Metal Beer Fest at the Wiltern in Los Angeles on December 1st through 2nd.

In addition to this tour Power Trip have kept busy in their own right, releasing a new track entitled “Hornet’s Nest,” in June, through Adult Swim. Last OCtober, the band also gave a tribute to Motorhead at the Loudwire Awards, joining Jamey Jesta of Hatebreed for a cover of “(We Are) The Road Crew.”

Pig Destroyer, have kept up with a similar momentum, dropping a music video for their track “Army of Cops,” in July, in preparation for their upcoming album Head Cage, which is due for a September release.

Joining these acts is newcomers Khemmis, who released their latest effort Desolation in June. While their first album came out in 2015, the band has been constantly busy, releasing this project as their third album in three years. 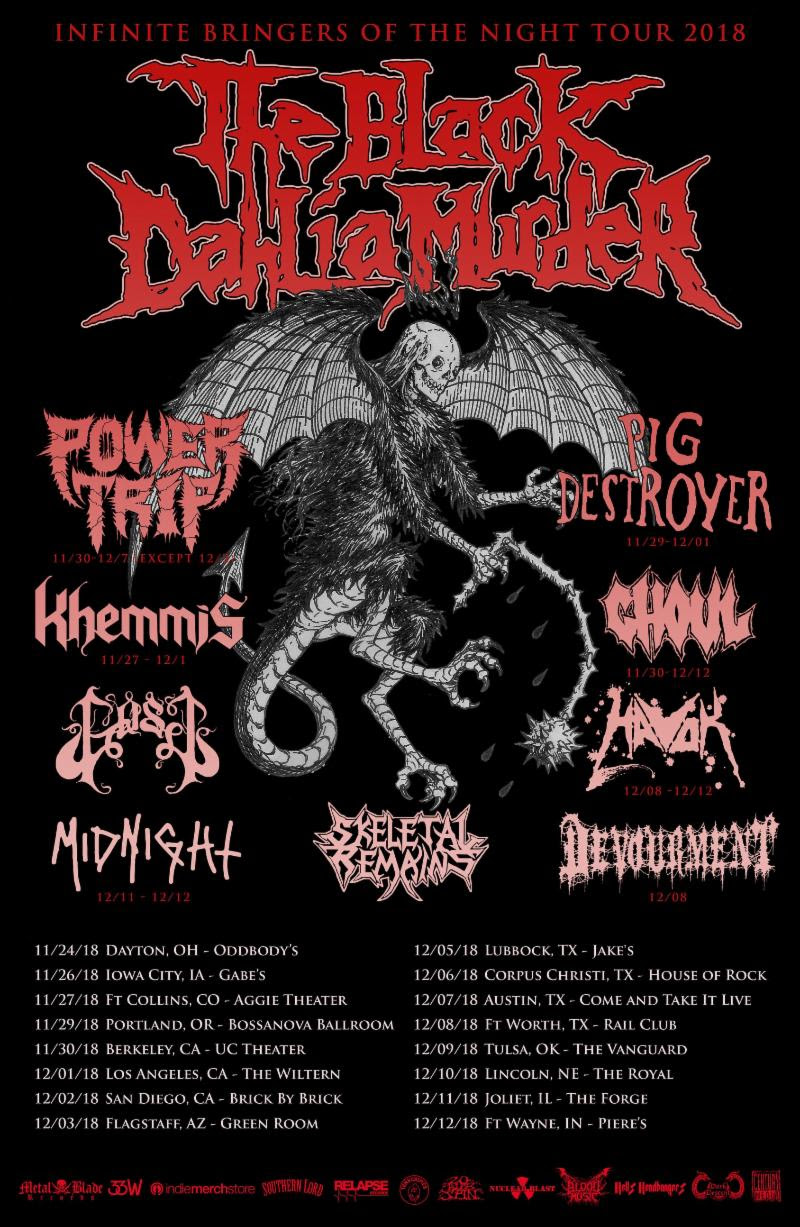 Infinite Bringers of the Night Tour 2018: