2018 seems to have a lot in store for us, whether good or bad. Under the umbrella of good lies a new wonderful tour co-headlined by The Black Angels and The Black Lips. In a recent press release The Black Angels have announced a spring 2018 tour alongside the Atlanta punkers The Black Lips. The upcoming tour has been beautifully titled The Birds and the Bees. For those who are looking to score tickets click here. Check out their live and taped Austin City Limits performance here and click at the 30-minute mark to see the psych-rock badasses tear your heart up. Check out the tour list below.

While on tour, the Black Angels and the Black Lips will be performing in New York City, Chicago, DC, and more. Frontman of Black Angels states that “Unlike a lot of things right now, touring with Black Lips just makes sense. It’s something that we have wanted to do for a long time.” 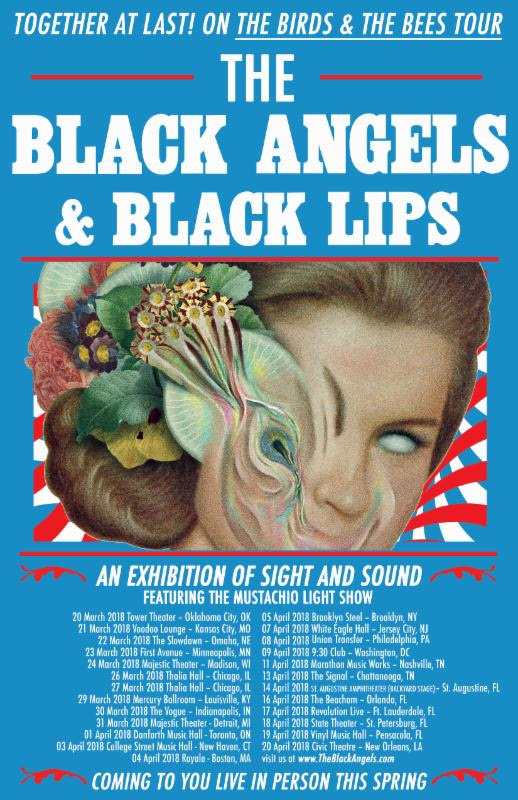 This past 2017, the Black Angels released their no album Death Song and received large praise from the likes of NPR Music, NY Times, Paste, Dangerous Minds, and Uncut. The Black Angels have also just recently finished their tour in support of Death Song.

Last year was also feature an eighth new album from the Black Lips titled Satan’s Graffiti or God’s Art? which was teased with a song featuring Yoko Ono and a music video for their track “Can’t Hold On.” The aforementioned album was produced by Sean Lennon and features 18 tracks that have all inspirations from The Beatles: interludes, spoken word, long breaks, Yoko Ono’s voice).