Back for its sixth edition, Monster Energy Fort Rock has announced its 2018 lineup. As usual, it’s a mix of some of the most popular genres of heavy music. From nu-metal holdovers like Godsmack and Breaking Benjamin to metalcore giants like Killswitch Engage and Hatebreed, there’s something to satiate any head-banger’s tastes. The whole thing goes down on April 28 and 29 in Sunrise, FL – part of the Greater Fort Lauderdale area.

The move to Sunrise offers expanded capacity for the two-stage festival.

Ozzy Osbourne is alone atop the ticket on Sunday, one of several major festivals he will appear at on his “Farewell Tour,” which could very well run until 2020. Also of note is a performance by Stone Temple Pilots on Sunday, which will be a part of their tour with new singer Jeff Gutt, who recently debuted at the Troubadour.

Other artists performing over the weekend are big names like Stone Sour, Halestorm, Bullet for My Valentine, Five Finger Death Punch, Trivium, Sevendust and Hollywood Undead. Show up early on Saturday or miss out on one of the most promising bands in metal, Power Trip, who are billed surprisingly low on the flyer. Their song, “Executioner’s Tax (Swing of the Axe)” came in at number 20 on our best songs of 2017 list. Texas Hippie Coalition, ’68, Bad Wolves, Pop Evil, Red Sun Rising, Avatar, Tyler Bryant & the Shakedown and Toothgrinder round out the Fort Rock lineup for 2018. 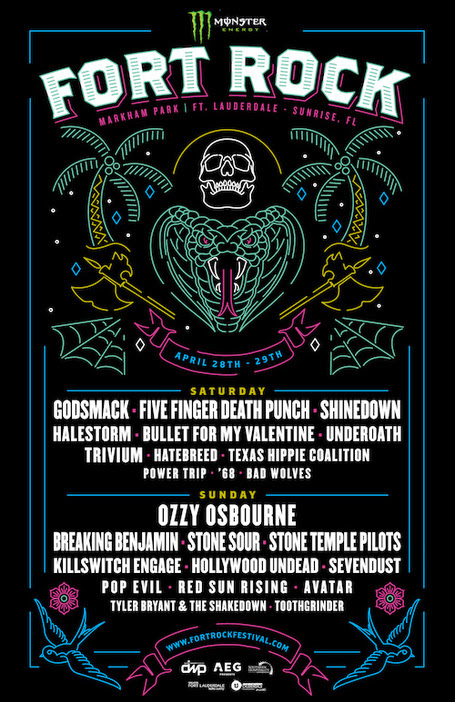