The worldwide tour of the psychedelic rock trio, Earthless is coming to stages all across the world starting in the spring of 2018. The North American tour is to support the band’s upcoming album and set to arrive through Nuclear Blast Entertainment.

Mario Rubalcaba, Earthless’s drummer, commented: “We are beyond chuffed to finally have a new album to go out and support and we can’t wait to play the new tunes for everyone- they are blastin’! We are also excited to have some killer support bands going out with us when we tour the US and Canada and when we head out to Europe/UK in April.  On our North American run, KIKAGAKU MOYO from Japan and JJUUJUU will swirl minds, add diversity and still keep things “heady” for all.  In April, we’ll be hitting Europe and the UK with our buds in COMET CONTROL.  They will keep you all warm and fuzzy on the inside while shakin yr brains from the outside. That tour also ends up at the mighty Roadburn Festival, where we are honored to be the official Artist In Residence over all 3 nights- each different and special.  We look forward to seeing you all out there. Cheers!”

The North American tour will have musical support by Japan’s Kikagaku Moyo and LA’s Jjuujuu, and Mad Alchemy will be bringing their liquid light show along for the ride. One of the stops that will occur includes a Brooklyn show at Market Hotel on the same day the new album comes out. Fans can purchase tickets for that show on Friday (12/8) at noon.

UPDATE: To support their new album, Black Heaven, which they have released recently, Earthless has revealed that they are expanding their 2018 North American tour. Their second leg of their U.S. tour will kick off on May 31 at Detroit’s El Club and wrap on June 15th in Memphis at the Growler’s. The band’s drummer, Mario Rubalcaba commented, “Our new album, Black Heaven, is out now and we’re super excited to get out on the road again to play the Nelsonville Music Festival plus a bunch of U.S. headline shows in spots we haven’t hit yet.” Scroll down below for the complete list of tour dates. 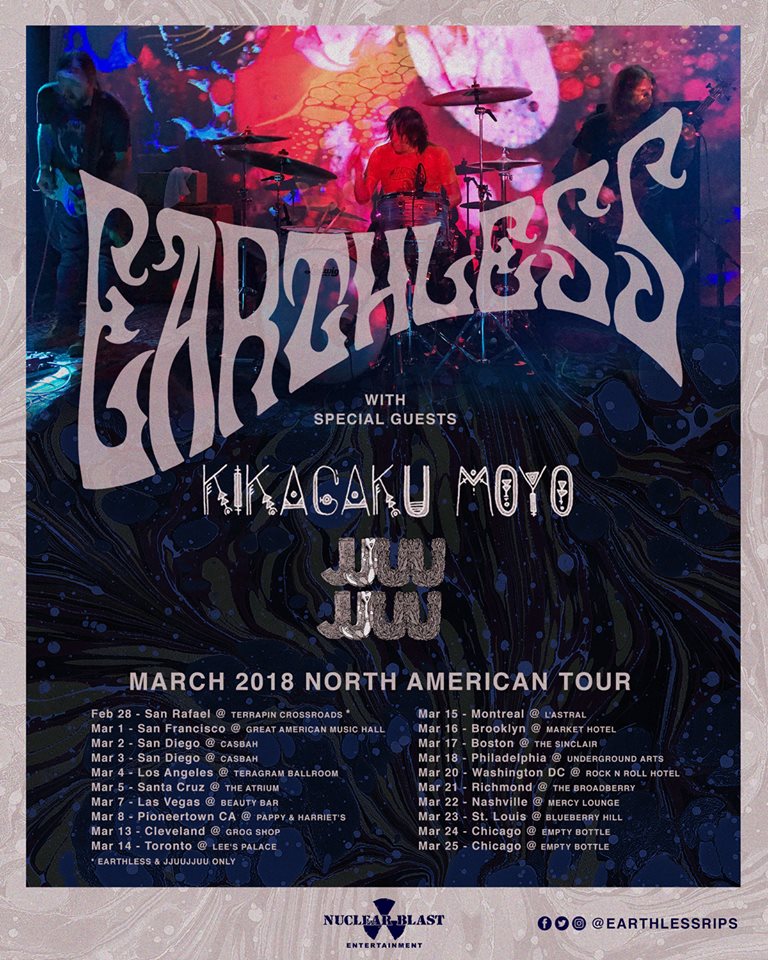