According to their official site, Roskilde Festival has announced its first headliners and lineup for the 2018 edition. It’s a special lineup for a special event, with many hyped up musicians confirmed for the 48th anniversary of Roskilde. The Danish music festival is held annually in the south of Roskilde. Created in 1971 by two high school students, it is one of the largest music festivals in Europe and the largest in Northern Europe. It has been announced that pop star Bruno Mars will top the bill alongside Myrkur, David Byrne and Gorillaz. Myrkur is one of the 10 Danish acts announced. Scottish band Mogwai, Fleet Foxes and Oh Sees also made the lineup for next years action-packed event. Swedish folk due First Aid Kit are attending, accompanying C.V. Jorgensen, Stormzy, Clutch, Chelsea Wolfe and Nelson Can. American rapper Vince Staples made the ticket, along with Scour, who have geared up and just released their second EP Red last month. Norwegian indie rock band Kakkmaddafakka, Omni, Slaves, Watain, Wilkinson, and Yasuaki Shimizu are all set to join in on the entertainment in Roskilde next year.

The event will take place between Saturday June 30th to Saturday July 7th, with around 175 acts set to play the Danish festival. The music and arts festival is non-profit and entirely run by volunteers. Tickets went on sale November 15th, they can be purchased on Roskilde’s official website. Foo Fighters, The xx and Arcade Fire played the Danish event in 2017.

(UPDATE 1/29): Rosklide Festival has officially announced that Eminem will be added to the lineup of already big name artists. This is another addition to Eminem’s already crazy upcoming festival tour this summer.

(UPDATE 2/28): A huge round of artists have been added to this year’s Roskilde Festival. Included in the announcement are the two biggest names, Nine Inch Nails and My Bloody Valentine. Other artists include Fever Ray and Four Tet, as well as Sampha. 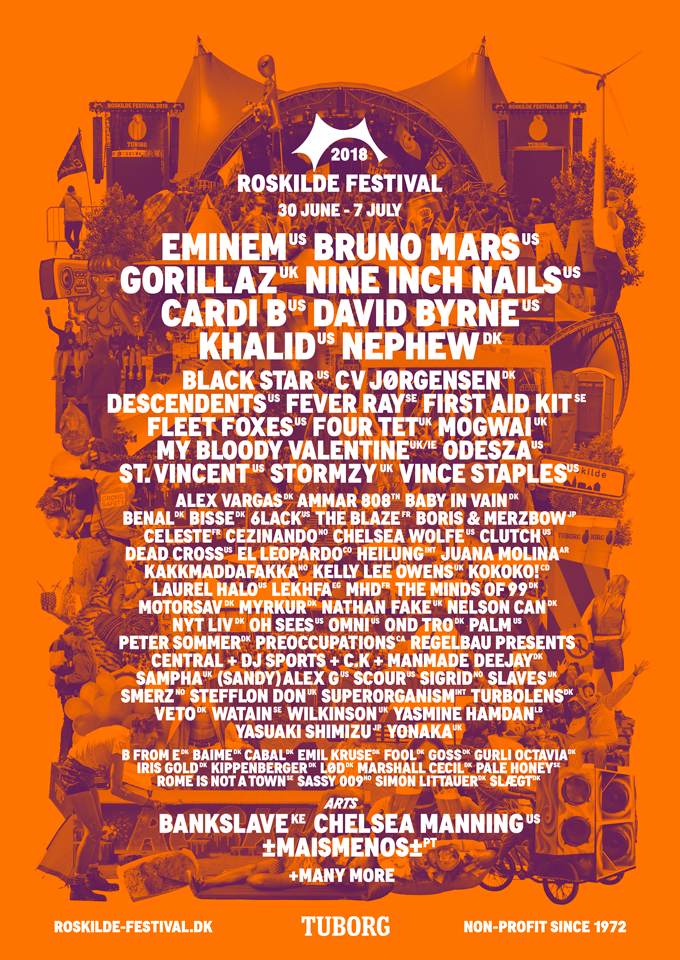