After having posted numerous tweets with photos of venues captioned “MORE. TO. COME.,” the Queens of the Stone Age have definitely lived up to their promise, with an entire new set of live dates added for the coming winter.

The band has been on the road for a while now, setting the story of a legendary tour. They have been laying waste to several tens of thousands of fans at festivals like Chicago’s Riot Fest, Denver’s Red Rocks, and even at California’s own Cal Jam 17. The band even has a first-ever headline engagement at New York’s Madison Square Garden barely a week away.

The new dates, which begin January 22, 2018 in Victoria, British Columbia, Canada and include headline stops at The Forum in Los Angeles and Bill Graham Civic Auditorium in San Francisco, will be on sale from October 27.

The 2018 shows are announced in the wake of every North American date on the current run having sold out while generating the most ecstatic responses of the Queens of the Stone Age touring history.

Obviously, the tour is in support of the band’s latest record Villains, and it’s no wonder why the tour has been garnering so much attention. The album debuted at No. 1 in the U.K., Australia, Canada, the Netherlands, New Zealand, Switzerland and Portugal, No. 2 in Germany, Austria, Belgium, Finland, Norway and Ireland, No. 3 on the Billboard 200, No. 4 on Japan’s international chart and No. 5 in Italy — easily the single biggest global sales week of the Queens’ seven-album stretch.

Produced by Mark Ronson and members of Queens themselves, the record was released August 25 on Matador Records. Villains‘ first seven days in existence also saw nearly a hundred thousand vinyl albums moved worldwide, as the record became the No. 1-selling vinyl LP in the U.K., U.S. and Germany. Villains also took the U.S. No. 1 spots on the Alternative, Hard, Rock, Internet and Independent Label album charts and No. 2 on the Digital Album sales chart.

UPDATE (11/6): Queens of the Stone Age have added more dates to their Villians World Tour 2018, and announced that UK punk rockers Wolf Alice will open for select dates. 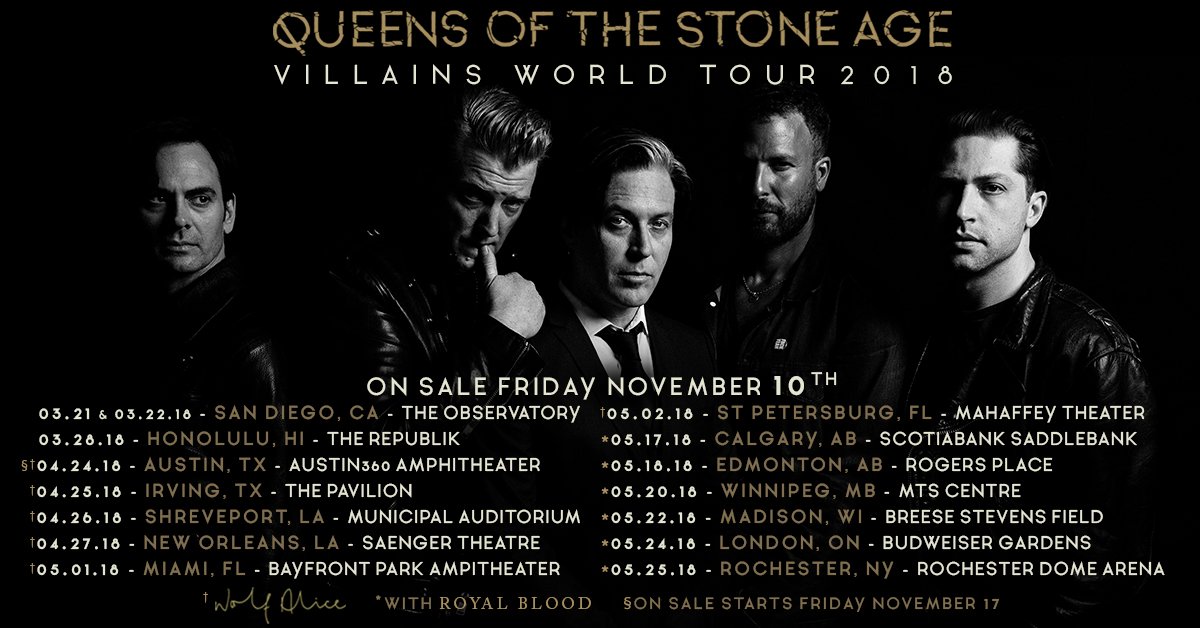 Check out the full list of upcoming tour dates below.