As reported by The PRP, Anal Trump has just released a new EP over the weekend titled If You Thought Six Million Jews Was A Lot Of People, You Should’ve Seen My Inauguration. All of the proceeds for the album is set to be donated to the American Civil Liberties Union. The ACLU is a nonpartisan and non-profit organization whose mission statement is “To defend and preserve the individual rights and liberties guaranteed to every person in this country by the Constitution and laws of the United States.” According to the group’s web page the album is available for $5 digitally with the Limited Edition 5″ Vinyl already sold out.

This new album follows up their previous project that was a 1 minute and ten second protest album toward the inauguration of President Trump, titled To All The Broads I Nailed Before. The ten songs that made up the album each amounted to less than ten seconds.

The grindcore outfit is led by Travis Ryan of Cattle Decapitation and Rob Crow of Pinback. Ryan has this to say of the bands and their political stance in a statement he made on his Facebook page.

I’m not a far left liberal, I’m DEFINITELY not a conservative. I’m actually somewhere in the middle although I’m registered as a Democrat. I think this world is too polarized right now and life doesn’t work that way. Life is chaos. Chaos resides in no end of any spectrum. That middle grey area is where discussion and dialogue takes place. Its where reality dwells and that’s the closest I identify with. Anal Trump is meant to be a funny response to this ridiculous man in a grindcore setting, a genre that gets its sound and values from punk, hardcore and the old days of extreme metal where fans didnt give a shit what nationality you are, what your political stance is. IT’S FUNNY. You know… ” HA HA”? Its meant to make people laugh. We’re glad most people get it, whether they’re for Trump or against him, and are getting a kick out of it. 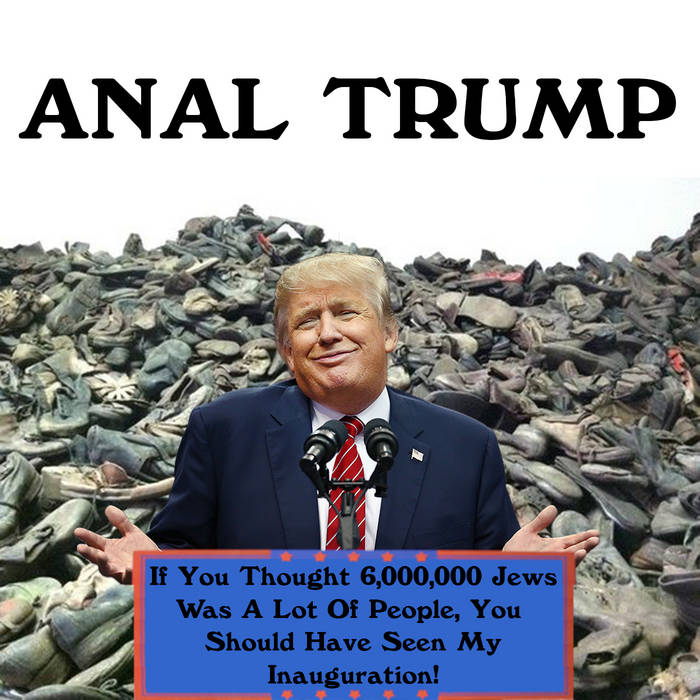 If You Thought Six Million Jews Was A Lot Of People, You Should’ve Seen My Inauguration Tracklisting