The online direct-to-fan music platform, PledgeMusic, has recently had to make a decision that they have not had to make since their launch in August of 2009. They had to, reluctantly, remove a pledge drive for one of their artists’ campaigns. The controversial Country artist Wheeler Walker Jr., had his sophomore album, Ol’ Wheeler, removed from PledgeMusic at the end of February, the new album was due out on June 2. While PledgeMusic had refunded all users that placed a pre-order on the album their money, Walker was still hellbent on getting retribution for the music platforms decision on the grounds that his fans are no longer sure that the album is still being released.

“When you’re an independent artist and they start taking thousands of dollars out of your pocket, that’s literally your pocket,” says Walker, according to Stereogum. “I’ve got to pay to cross my fingers my fans are going to find the new link to buy it again. I can’t go on tour until I get some album money and pay for a van. They’re directly affecting my business when they already agreed to it in the first place.”

The crowd-funding site had to make their decision because of the negative feedback they were getting from their site users due to the graphic content of Wheeler’s new album and the value-added elements he offered fans. Walker later explains how one element in particular could have been the culprit to the user complaints.

PledgeMusic said in a statement, according to Stereogum, “The Wheeler Walker Jr. campaign was initially released without any editing and elicited strong fan complaints. In an effort to be responsible to both the artists and fans that engage on our platform, we asked for modifications to the campaign’s presentation. This included a video describing the overall campaign and the names of the packages being offered, not the actual album content.”

Walker said in a statement to Billboard, “What I heard was that their customers just started complaining, but I make my living from customers complaining, so it didn’t throw me. That’s good for me. But maybe there were some really hard-core Christian conservative bands on there whose fans were complaining.”

Walker’s fans also took to the PledgeMusic message boards to express their outrage toward the situation. The bulk of their comments came from a troll feed on the pre-order page for a forthcomig 311 album, that the site eventually had to delete due to their derogatory nature. PledgeMusic then reached out and asked that fans “stop the spamming”

Jesse Atwell, the senior VP of marketing at Walker’s Austin-and Nashville-based management firm Triple 8, explains her back and forth with PledgeMusic. “Fans are not under our control,” Atwell said in response to the spamming. PlegeMusic’s response to her was, “Point taken, but Wheeler’s messaging to them is.”

“So not only was the campaign officially off, but now they were coming back and asking us to change the story,” Atwell said.

She then goes on to explain that Wheeler was treated unfair on the grounds that his content was as objectionable as they were making it out to be in comparison to other artists content on the site. Atwell explains that, “With the video that Wheeler is mentioning, the customer has to go and push play and experience that video. With some of these other campaigns, oftentimes the offensive content was featured front and center. Amanda Palmer, who is a fantastic direct-to-consumer case study, has a campaign titled ‘The Amanda Fucking Palmer Salon,’ and this is all public and all unedited. Rob Zombie offers a poster that has naked aliens fucking each other.” Atwell then goes on to point out other artists such and Steel Panther, whose video campaign mentions that it “does not guarantee that you won’t get a 5-gallon bucket of cum dropped onto your head.”

In a rebuttal to these claims also reported by Stereogum, a spokesperson for PledgeMusic said that the campaigns that are in question did not generate the complaints that Wheeler’s did. They go on to say that the number of objections registered by users is “proprietary information, but I can tell you we’ve not gotten this kind of pushback, ever. We represent the artists but also the fans, so when our users really take issue with something, we have to listen to them as well. People are being misled that somehow we’re trying to edit his creative output, when in fact I would have hoped in some ways we’d be applauded for wanting to put it out there without one note of editing. We only wanted to refine the presentation in a way that the greatest number of fans could be exposed to it, so everybody wins. Unfortunately, the artist wasn’t willing to make those changes, which we respect. Despite some of the not-nice things he’s said about PledgeMusic, we wish him the best and hope we can do business with him again, because we would bring a lot of value to the table for him. We are reviewing our process and how to deal with these types of situations.”

In a responsive statement to the degree of the work he produces Wakers questions the state of current Country Music. He said, “When was the 2 Live Crew thing, in the ’80s? No one’s even pushed the boundaries of country in those intervening fucking 30 years. Talk about playing it safe. They could use some controversy.”

For the album art to Ol’ Wheeler see below and look for the new album’s release on June 2. 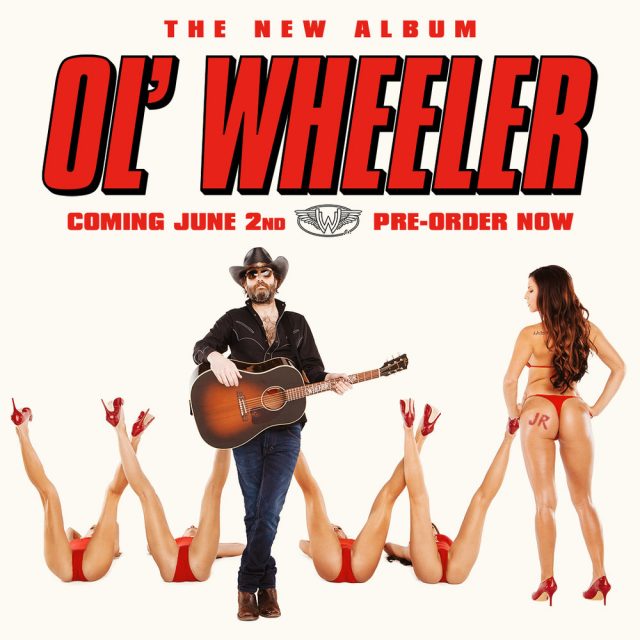