Made In America Festival Announces 2016 Lineup Featuring Jamie xx, Chance The Rapper And Edward Sharpe And The Magnetic Zeros

The well-known Made in America Festival has just announced it’s musical lineup as well as ticket sales.

This musical gathering will take place in Philadelphia from September 3-4. For tickets, attendees will have the option of purchasing a “Weekend” or “Ultimate MIA Experience”,and pre-sales for both these ticket options begins June 22nd at 10 a.m. EST. You can purchase these tickets at ticketmaster or the Made in America website.

Curating this event since 2012, Jay-Z  has made this festival one to remember, and it keeps on getting better each year. Rihanna and Coldplay are set to headline this years festival. Chance the Rapper, Jamie xx, Lil Wayne, and 2 Chainz are among the artist that will compose the musical talent performing at this festival . 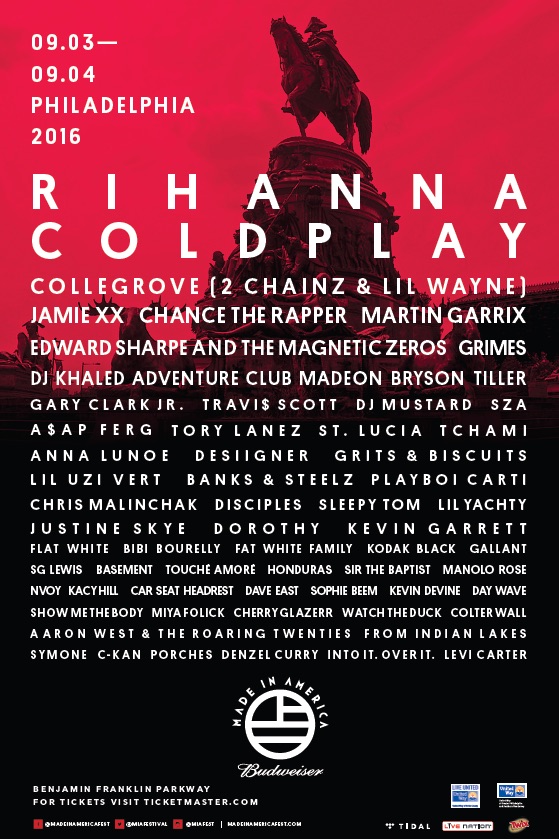 Rihanna, besides headlining this festival, has been pretty busy. The “Work” singer joined Calvin Harris on stage during his set at Coachella, but her collaboration with Harris does not end there. Back in April, Harris released his new single “This Is What You Came For” featuring Rihanna. Harris has been on instagram non-stop, tagging Rihanna in his posts to promote the remixes of his latest hit single.

Like Rihanna, Coldplay has done their fair share of appearances as well. Headlining at Radio 1’s Big Weekend just this past May has added to this bands extensive performing resumé.