Photo Credit: Sharon Alagna
The Mamby on the Beach Festival has released their 2016 lineup for their much anticipated second run at Oakwood Beach. 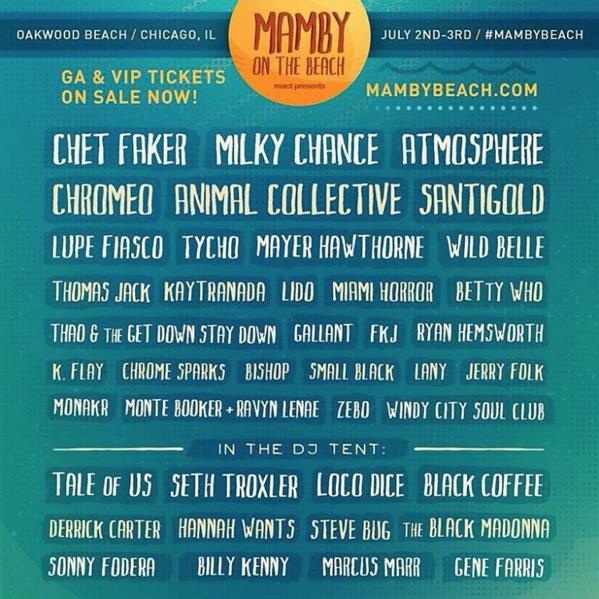 While Mamby on the Beach may be only a second year festival the acts that they acquired for this year are better than a lot of competitors. With the top billing artists being Chet Faker, Milky Chance, Atmosphere and Lupe Fiasco they have really out done expectations. With there being 30 total bands to perform at the festival, these are only some of the few in attendance. Acts such as Santigold, Mayer Hawthorne, Chromeo, Animal Collective, etc. are also set to perform. The two day festival will begin on July 2 and finish up on the 3. For a full lineup see below.
An interesting side note, reported by DNA Info, is that Lupe Fiasco along with other acts have gone onto twitter in surprise to see their names in the Lineup. Fiasco tweeted this once the lineup was announced…

When you didn't know you was booked for a show again so you start looking for a new assistant. https://t.co/FLiRNS90Wc

While it is unsure as to whether Fiasco will actually perform his intended spot, Mamby on the Beach tweeted back in an attempt to ameliorate the situation.

Tickets for Mamby on the Beach will go on sale Tuesday the 19 and will range from $155-199 in price. The difference comes from the latter being a two-day VIP pass and the one before it being the two-day general admission pass. Tickets for both prices can be purchased here.