Musical legend Bob Dylan is turning 75 next month, and to celebrate, a lineup of artists are getting together to play Dylan Fest, put together by The Best Fest. Among the lineup are Jason Isbell, Kurt Vile, and Boz Scaggs. Kesha will also be playing at the festival, her first show since the legal battles against record producer Dr. Luke. Kesha has not played a show since her Warrior tour back in 2012. Dylan Fest will take place May 23rd and 24th (the latter being Dylan’s actual birthday) in Nashville at the Ryman Auditorium. Proceeds for this festival will benefit Thistle Farms, which is a charity that helps women recovering from prostitution, trafficking, and addiction. 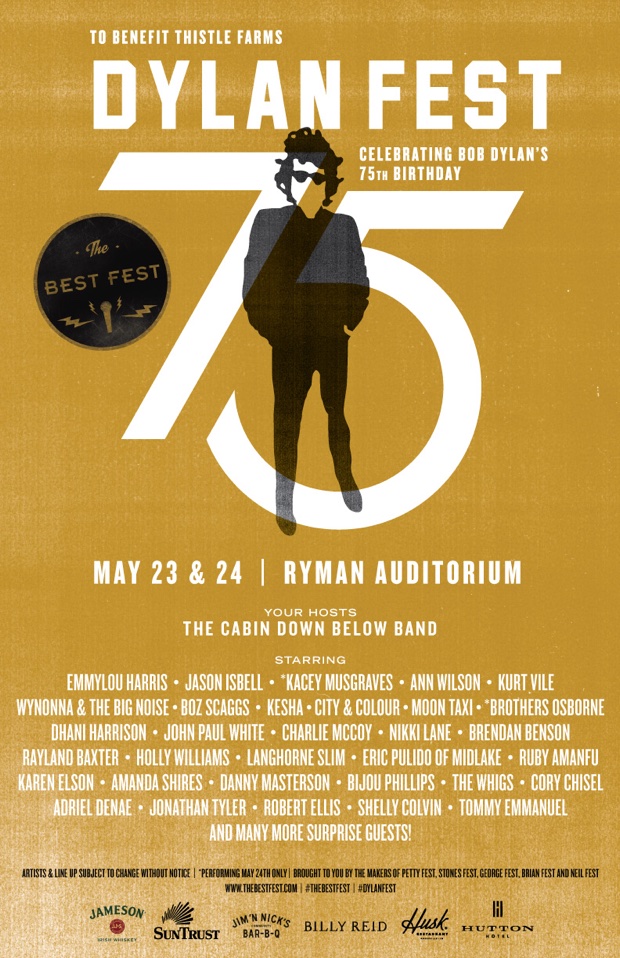 Jason Isbell is an American singer-songwriter from Alabama, and a former member of Southern rock band Drive-By Truckers. After leaving the band, he released his first solo album Sirens of the Ditch in 2007. He went on to release four more solo albums, his latest being Something More Than Free in July of last year. The album won the Grammy for Best Americana Album and received universal acclaim. Find a review of the album here.

Another American singer-songwriter, Kurt Vile has released six studio albums in his solo career so far. b’lieve i’m goin’ down… was released last year. Vile is currently on his summer tour, which started at the beginning of this month and will involve tour dates across North America and Europe. It will conclude near the end of August.

Boz Scaggs has been around since the 1960s, when he first gained fame as a guitar and one-time lead singer with the Steve Miller Band. Since then, he has released a whopping eighteen studio albums in his solo career. A Fool to Care was released last year, and the album consists of a compilation mostly of covers. It reached #1 on the Billboard Blues Album chart.

Tickets for both days of the festival will go on sale this Friday, April 15th at 10am.