FLAG, a reboot of the original American hardcore punk band Black Flag, has announced tour dates for this summer. The tour will kick off on May 28th in Las Vegas with the Punk Rock Bowling & Music Festival, then end in Florida on July 10th. The band will be participating in the Punk Rock Bowling & Musical Festival on several different dates in Vegas, Asbury Park, and Denver along with their full headlining tour. Several other bands will be accompanying them on tour: hardcore punk band War On Women, rock and roll band The Dirty Nil, punk rock band Off With Their Heads, and hardcore punk band D.O.A. On the tour, FLAG will include members Keith Morris, Chuck Dukowski, Bill Stevenson, Dez Cadena, Stephen Egerton. 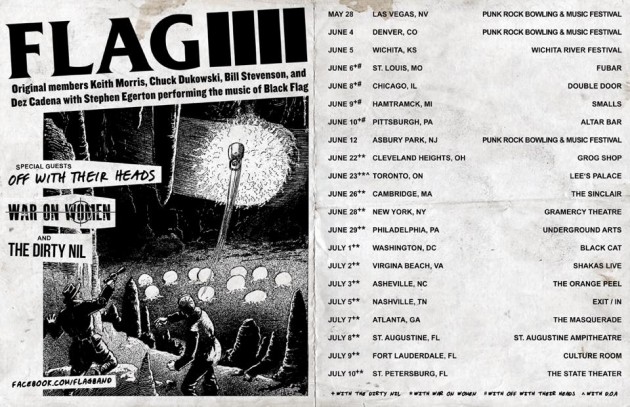 Back in 1976, American hardcore punk band Black Flag formed in Hermosa Beach, California. They released six studio albums before breaking up in 1986 due to various tensions between band members. In My Head turned out to be the band’s last studio album before they broke up after ten years of playing together as a band. In 2013, it was announced that Black Flag would reunite to tour as well as put out a new album, What The… in December of that year. However, the album tanked and was not well-received by fans and critics. Later, it was announced that the band would begin touring again, but under the new name FLAG.

Black Flag is considered to be one of the first hardcore punk bands.  They were also considered post-hardcore because of the experimental style they started playing later on in their career. In their second studio album My War, the band experimented with sludge metal. They’ve also incorporated various other unique music styles into their music, including blues, jazz, and spoken word. During their ten-year career, they became well-known particularly in the Southern California area.