Worcester, Massachusetts will hold the 18th annual New England Metal and Hardcore fest at the Palladium. The New England Metal fest is an annual festival held in Worcester to promote merchandise made by heavy metal and hardcore bands as well as promoting the producers who publish their music. It has been held at the Palladium since 1999. The lineup for this year’s festival will include The Black Dahlia Murder, Unearth, and Killswitch Engage along with other musicians in the lineup at the bottom of the page. So far there are fourteen bands in the lineup, but many more will be announced before the event begins on the 15 of April and ends April 16.

Killswitch’s latest album, Incarnate, comes out in March of this year. The band will be on tour March 16 with special guest Memphis May Fire and 36 Crazyfists. All three of those bands will be performing at the last day of the festival. Tickets can be purchased on the Ticketfly website and also at any FYE music store. The tickets range from $30 for Friday’s headliners, $35 for Saturday’s headliners, or $59 for a two-day pass to both shows. 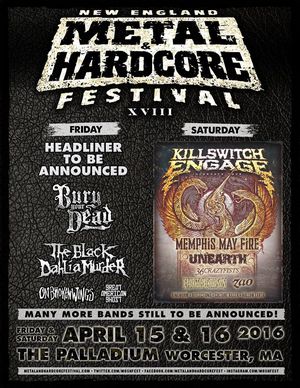