The Process of Pressing Vinyl at Capsule Labs

With the advent of rampant piracy and blatant copyright infringement, vinyl record sales have not only suffered but are virtually nonexistent. One hypothetical exception is the hardcore fan buying a vinyl record from the merch booth at a concert as a souvenir. Fans knows how painfully easy it would be to download the same album from their home computers, and yet they choose to pay good money for it. These fans may not even have a turntable to play the record on, but having a tangent form of music memorabilia and artwork along with the knowledge that they are supporting the band he loves is a comforting feeling of dedication for the fan. 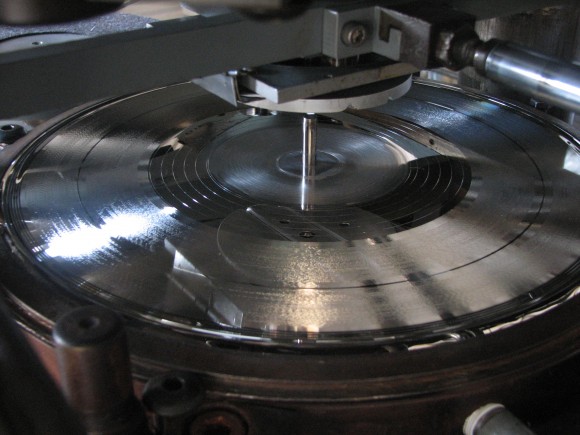 Given the current state of the music industry, one would think all of the record pressing plants were shut down with all of the record stores. However, nestled snuggly behind the Los Angeles River is Capsule Labs vinyl pressing plant. Not only do they manufacture vinyl there, but the refurbished aircraft hangar is also used as a recording studio. They recently held a live recording show for the 15 year anniversary of Peanut Butter Wolf’s label, Stones Throw.

“Chris Peanut Butter Wolf said he wanted to do some direct to disc shows with us,” says Gil, one of the plant’s owners and operators. “The twist was that he wanted to bring an audience in to give that live show feel to the recording. Usually we have to do multiple recordings if a band doesn’t like the way it initially sounds, but that wasn’t an option with the Stones Throw shows.” Gil along with friend and business partner Sebastian own Capsule and are essentially the sole technicians. “Chris PBW wants us to run the pressing machines to make cuts of the last Stones Throw shows at the next Stones Throw show.” He adds, mentioning that Stones Throw is the first of many live, direct to vinyl shows to come. 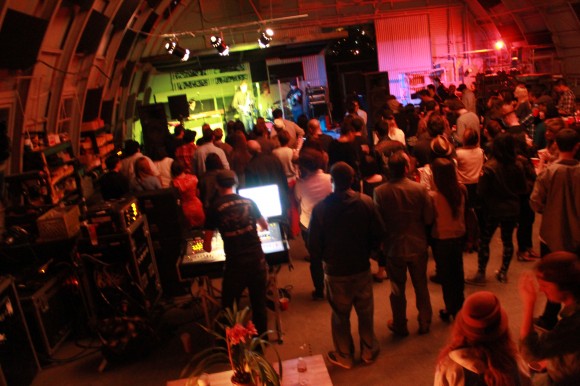 “Although the Silverlake plant location has only been around for under a year, Capsule Labs started in 1997 in DTLA,” Gil elaborates on the history behind the pressing plant as we walk through the expansive hangar. “It was just sound mastering then, but we soon expanded into pressing after we literally took our one pressing machine apart to fix it. There are parts on the machine that just couldn’t be replaced if they broke. A lot of the parts are very rare, expensive, or one of a kind.” This is an ancient, dust caked machine, which uses up to 150 psi and 400 degrees Fahrenheit to press thousands of tiny vinyl pellets into a hockey puck sized disc and from there the grooves are made into the final product. That product is immediately cooled with water into a record. The metal plates from which the record templates are pressed take days to be made in metal molding specialty factories. The labels in the middle of the records are made of regular paper. They use no adhesive but are instead simply pressed onto the record with heat. The excess vinyl mold that overflows from the press is recycled, making the process environmentally friendly. “We’d also like to make art out of otherwise discarded vinyl. We’re also working on our own 45 spider plugs.” Gil says. 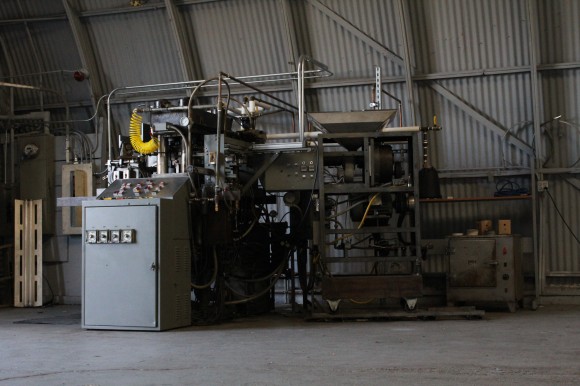 This vinyl pressing machine puts out more records than Ke$ha.

While most vinyl pressing plants employ several machines, Capsule only uses one to make ten to fifteen thousand records a month. “The machine came from a guy at another pressing plant who couldn’t get it to work. I answered an ad for it, came down to his warehouse and bought it at full price. He was skeptical to sell it to me at first because that meant he had new competition, but with the money I paid for it he bought a new boiler water cooling system and wrote me off as a sucker. A couple weeks later I go back into his shop to buy some raw vinyl beads. Surprised to see me, he asks, ‘Why are you buying vinyl? Don’t tell me you got it working!?’ I casually tell him, ‘Yeah, I’m pressing.’ Of course he is shocked to find out I got the machine working in under a month. I literally had to take the whole machine apart to repair it. It took a long time to learn how to use it and we’re still learning new things. Since then we’ve made improvements like equipping it with custom digital controls to make it easier to use.” 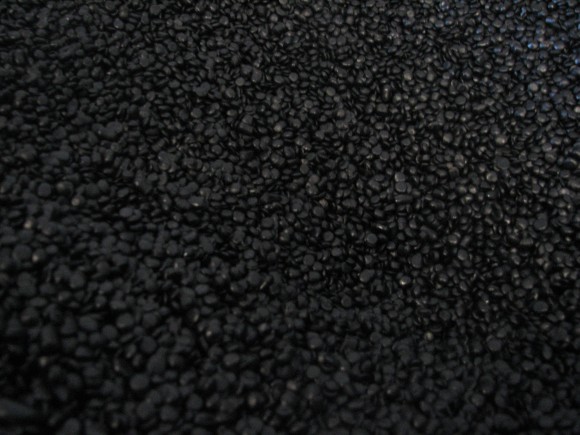 In the late ’90s, when everything was re-released with the novelty that it was “digitally re-mastered,” the improvement of quality was subtle and many regarded it as nothing more than a gimmick. Today the word “digitally re-mastered” has been so overused that it’s as worthless as an old Bee Gees record. Now that practicality of mobile music has peaked, the forthcoming generation of young musicians now has both digital and analogue recordings at their disposal, so in the near future what we’ll be seeing is musicians being selective about the format of their music for the inevitable augmenting of sound quality. Vinyl players more accurate capture and replay frequencies of recorded sound, otherwise compressed in digital recordings which sacrifice quality and replay with a slightly more metallic sound. The redeeming factor of digital, of course, is the convenience of carrying around compact recordings. A couple decades ago having access to ten thousand songs in the palm of your hand was unheard of, and certainly the same device a few hundred years ago would have left the branding of a witch.  “There is a certain warmth with vinyl. Not just nostalgia for people born in the heyday of vinyl recordings, but a specific qualitative distinction.” Sebastian explains. Recently, the pressing plant has put out records for DJ Spinna,  Cha Cha Project, Christopher Ray, No ID, Jennifer Hudson, and ?uestlove. “We did a record for the Tiesto label. Holy Grail put in a pretty large order for black and white vinyl. Randy Jackson is sending his technicians down here next week, and more coming in all the time.” Says Gil. “We specialize in a few different things here. We’re trying to make it a hub for the community while showcasing events. It’s something we’ve been working on 12 years now, which is recording a band live to vinyl. Not something I invented, it’s been done many times in the past, it’s just rare. Looking back, you don’t see it too many times. There aren’t too many opportunities where a proper venue has record cutting proper equipment and proper mixing equipment, sound stage and all that. It took a little bit of time to put it all together but now that we have everything we’re able to execute live sessions.” Gil elaborates on the live to vinyl recordings. “How many shows have you been to where you think, ‘that was such a sick show, I wish I could relive that.’ And with the live, one take recordings, not only does that become an option but at vinyl quality.” Sebastian adds, “How many bands do you listen to where they sound great on a recording but they can’t play live. So many bands nowadays are overproduced. How many takes did it take to get that one song right?” The view from the stage before a live performance.

Not only is the stage set-up for the live performances amazing, but the entire air hangar is insulated with padded fiberglass for amazing acoustics. On one end of the hangar is the elevated stage adjacent to a handful of giant speakers stacked against one another. Hanging from the middle of the roof are hollow white orbs constructed from fiberglass which dangle like sound enhancing chandeliers. The acoustic amplification devices are subtle enough to appear as ambient décor to the untrained eye, but their utility is magnificent.

Upstairs, the studio is full of retro mix pads, keyboards, drums, a vibraphone, a reverb chamber, basically any producer’s wet dream. Gil refers to it as a “practice museum.” He and Sebastian are essentially the only two technicians at the plant and handle all of the mixing. As far as the future of Capsule is concerned, the two are considering renting out their vintage tech and studio space to local musicians and toying with the idea of turning the place into a record specialty store, although they presently only sell vinyl to the labels who contract them.

For Gil and Sebastian, the dream is to own a high end music boutique that sells exclusively to the tightly knit LA music scene of recording artists. A place where talented musicians can come in, by appointment of course, and browse the recordings pressed at the plant before they become available in stores. They imagine a place where musicians can meet other musicians and discuss the quality of sound, the fickle music industry, and the sonic future. The two also dream of a non-profit which showcases music that needs to be heard regardless of the amount wealth possessed by the band. Big plans are ahead for the crew at Capsule Labs and the Silverlake music community, including the much anticipated triumphant return of vinyl popularity.