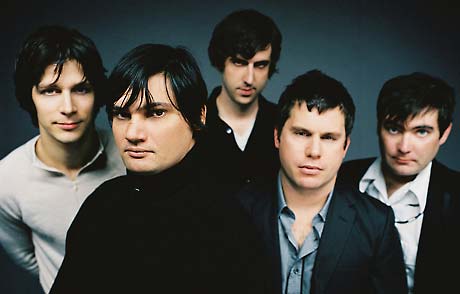 ….And You Will Know Us by the Trail of Dead , named after some Mayan chant or something along those lines started up about a decade ago right here in ATX, and have gone forward to create no holds rock n’ roll that encompasses many sub-genre names under the metal, indie and art rock umbrellas.

The sound that this band creates is so dense and lively. A full on whirlwind of heavy and fast drum and bass that envokes a sense of erratic movement in the music. Hard screaming vocals from both Conrad Keely and Jason Reece, who switch off on playing drums and guitar as well as vocal duties, add to the chaos to create swells of cathartic and heavy sweating bursts of song. They have a few ballads too, but even with a softer feel to the songs, the sense of ever-flowing wild energy is merely subdued, you can still feel it, never really leaves.

Trail of Dead’s live shows always leave an impression on the audience. A whole lot of noise hitting you all at once. Sometimes breaking a plethora of instruments, leaving a path of destruction to match the explosive energy of their music. Just try to keep up with those constant instrument changes, with band members already moving all over the stage as is, crashing and moving this or that. The band  has a way of making the audience never feel separate from them for a millisecond during the show, you are fully connected to whats going on onstage even as the first sonic boom of noise pulls you in.

Co – show mates Marnie Stern, Ringo Deathstarr & Follow That Bird all boast impressive lists of qualities in their own rights as well, this is just a great way to spend Halloween!