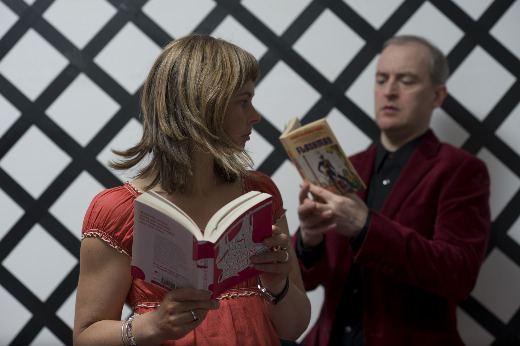 Surprise! Glasgow band The Vaselines have a new album! No really! Whereas most bands can’t even handle a smooth transition between albums with a measly one year time span in between, The Vaselines waited 21 and managed to do it well.

After calling it quits in 1989 in the same week their first album Dum Dum was released, a certain front man for this little Seattle band called Nirvana kept them from fading into obscurity by covering three of their songs causing a growing following. Eugene and Francis re-united in 2008 for Sub Pop’s 25th anniversary and did a full on tour in 2009, all while only boasting just two singles and one album for the last two decades. Impressive, no?

Using the same producer as they did way back in the day with Dum Dum, Sex With An X stays very true to their signature sound,but admitting that they can’t really sing cheeky, lollipop cute lyrics and have it not sound a little wanky half their lifetimes later, has more grown up and refined touches. Don’t worry, there’s still plenty of sly sexiness and word play throughout. The title track showcases how The Vaselines have just as much energy, but in a more controlled manor with smooth harmonies and jarring guitar work.Frances McKee’s growling vocals on Whitechapel are definitly a new take on things, and it sounds suberbly almost primal against the understated backdrop. The most entertaining song on the album is I Hate the Eighties, which basically tells you to get over nostalgia for that era because it consisted of bad music and even more horrible fashion choices in a “we were there and saw how much it sucked so please don’t make us re-live it” sort of way. Sex With An X shows that indie rock can still be a whole lot of fun with lots of sharp sarcasm and general, albiet subtle at times, indecency.

The best way to describe this band live is FUN! Sex jokes and killer guitars. Stevie Jackson and Bob Kildea from Belle & Sebastian are also in the touring band on guitar and bass as well as Michael McGaughrin from the 1990s on drums. If you don’t know any of those names, go anyway.