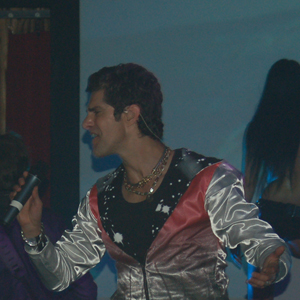 Playing sans his Jane’s Addiction band mates, Perry Farrell played late on Saturday accompanied by a gaggle of burlesque dancers and his own scantily clad wife. While certainly disappointing for those not fortunate enough to catch Jane’s Addiction two days earlier at the Rock the Rabbit, it was a unique and enjoyable change of pace. Best described as an IDM hybrid of Farrell’s Peretz DJ moniker and the jamminess of his Satellite Party project, a blippy version of Porno For Pyros “Tahitian Moon” filled the room. Fans stood on every table and couch lining the venue’s walls, trying to gain a better view of the carnival-style presentation. 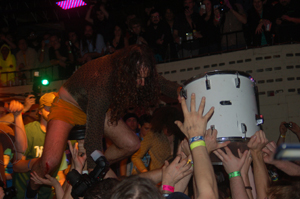 Monotonix could just be the big surprise hit of the festival. The three member group, musically is a heavy metal Gogol Bordello. It’s the erratic nature of their approach to performance where the story really lies though. Seemingly unwilling to perform as a simple rock combo on a stage, the lead singer spent most of the show running into and on top of the crowd, surfing and shouting in a unhinged happy howl. Passing a drum stool to the crowd and the drummer’s bass drum, Monotonix’s singer climbed the crowd to sit atop the stool, and then like a possessed Captain Ahab hell-bent on driving his own ship to destruction, commanded the crowd with two mallot drumsticks. He thwacked away after each motion to the audience as the guitarist persistently and elastically kept the distorted melody runnning. 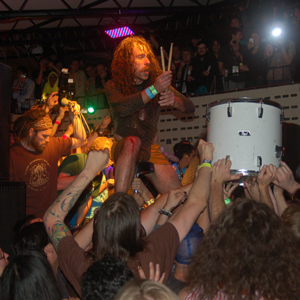 Venue bouncers nervously jumped in and out of the crowd determined to keep things from erupting into complete chaos, the crowd moshing happily through almost every second. To change things up the entire band got into the crowd themselves, demanding that every person present sit and be silent, offering a keyword of “yasul” to indicate that every person should shout “yeah” and instructing that once the music begins that all should rise and dance. The singer than bellowed a gypsy-style melody periodically inserting the keyword to an enormous unified “yeah!” Patiently rolling out each line, finally the music began to a bombastic rise and mosh from the entire crowd. Before the long the entire drum kit was on top of the crowd and the drummer too was riding the kit on top of the fans, pummeling the rhythm. 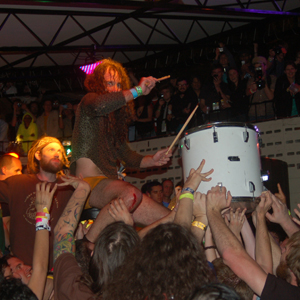 And then, without warning, the band simply ran out the front door, drums and all. In utter amazement, slowly the crowd filtered out to see what was happening. The band members took over the street, literally running from space to space, drum rolls shooting out like machine gun shots until finallly the singer again asked everyone to sit. Offering that, “This will be special!” Pausing for about twenty seconds he finally yelled, “Thank you!” to a monstrous cheer from the crowd. 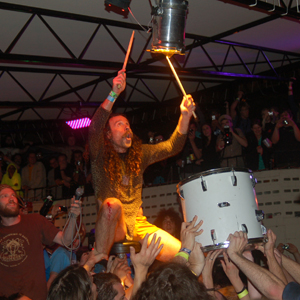 Words almost fail the uncontrolled chaos of this experience. Whatever you call Monotonix, they get the gold star for innovation and bravery. This was a thrilling end to a jaw-droppingly fantastic week of music. 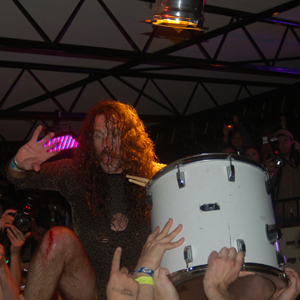 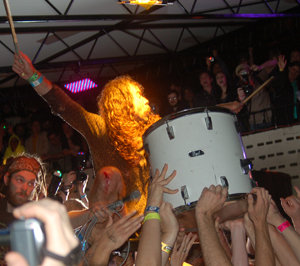 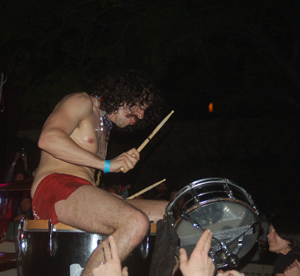 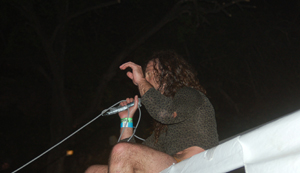 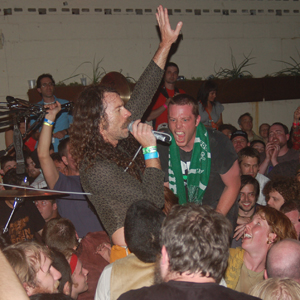 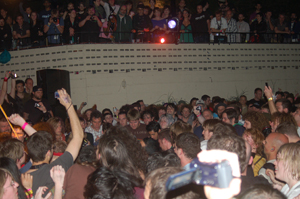 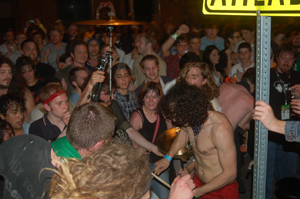 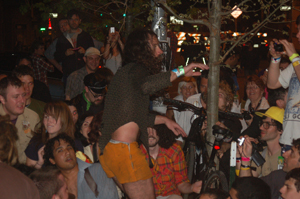 Kanye West – Perez Hilton Dell Lounge
Literally running from the close of Monotonix after a hot tip, this reporter just missed Kanye West’s surprise performance at Perez Hilton’s Dell Lounge. Attendees claimed West performed an awesome short set including “Stronger” and “Love Lockdown.” It’s almost hard to fathom, but could this really be a week where Jane’s Addiction, Metallica and Kanye West all showed up to play sets? What’s next? A random appearance by the surviving members of Led Zeppelin?

Pop rocker Ida Maria was up next, as many fans quickly exited following the big surprise performance. Maria strummed power chords over her drinking song “Louis” and her pleading “Queen of the World.” For her own brand of blunt honestly Maria also playfully sang “I like you so much better when you’re naked” which seemed appropriate given the endless debauchery of the late-night parties during SXSW. The free booze and swanky party clothing all seemed to fit perfectly along side this moment. 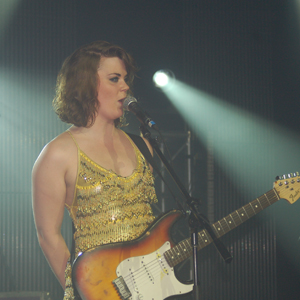 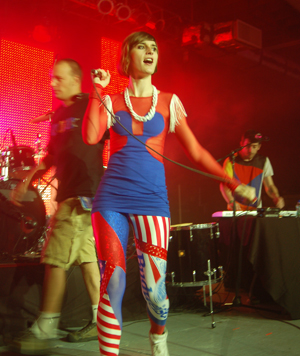 As the fatigue and complete exhaustion of four days of endless walking, running and working set in, the need to depart took hold as final party act Yelle was introduced emphatically by Hilton. A french pop starlet adorned in a bizarre body spandex melding the American flag and the Budweiser logo, Yelle anxiously asked the diminishing crowd, “Are you ready to dance?” No, Yelle. No offense to you or your music, but after four of the craziest, most amazing and tiring days of music coverage memory can recall, we’re simply ready to sleep. 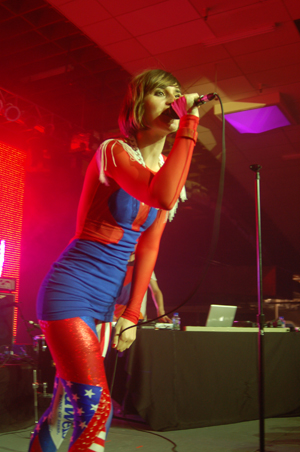 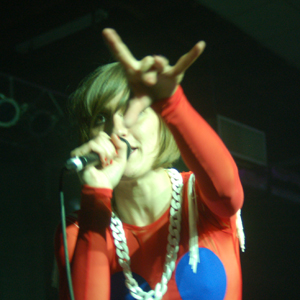