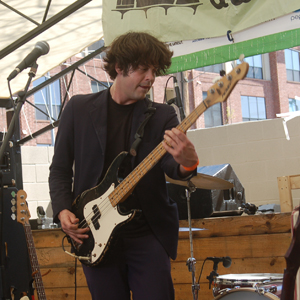 Atlanta natives Gringo Star worked out a peculiar, yet satisfying mix of walking basslines, alternating singers and pop rock. Singing “my satellite” repeatedly, the group’s drummer even led the group for a track. While not so far as Beach Boys-esque in their harmonies, the collaborative “ahhs” were a nice addition of color to the band’s sound. 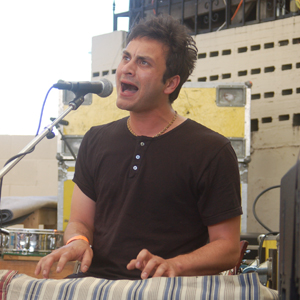 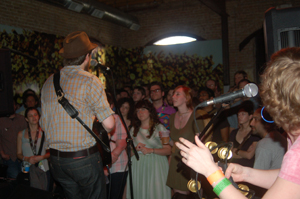 On the other hand, at the inside stage at the Mohawk, Andy Cabic’s Vetiver played a decidedly more good vibes folk rock than the freak folk leanings of his frequent collaborator Devendra Banhart. Stuck in a small room tucked into a corner, it was hard even to find a place to see the band. The rousing energy more than made up for it. 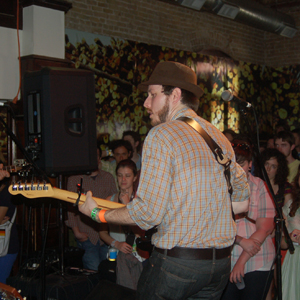 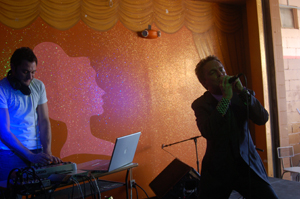 “Games / Games / We like to play those games,” rang out Project Jenny, Project Jan with authority. An excellent synthesis of electro and rap singing, the duo came through with rambunctious fervor. One member suit-laden and barking out rhymes like a less preachy John Lydon circa Public Image LTD. and the other triggering the music via laptop (and wisely opting to cue all bass notes manually for a more organic sense of timing), nearly all of the small crowd was dancing. PJPJ should be in bigger parties and bigger showcases, uhm, now. 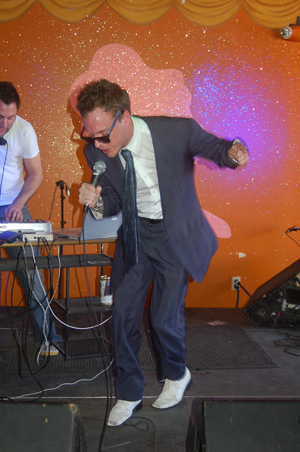 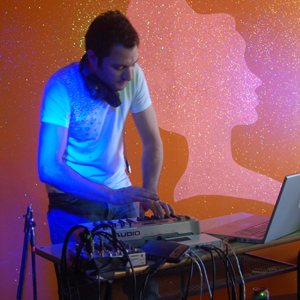 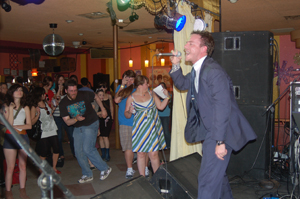 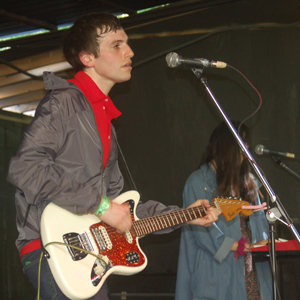 In the vein of true early 90’s alternative bands. The Pains of Being Pure at Heart bled noise on top driving rock. More audible than My Bloody Valentine (and with the addition backing keyboards) this four piece is deserving of the hype. The singer blends his perfect low-key delivery over abrasive rock in just such a manner that fans will love. 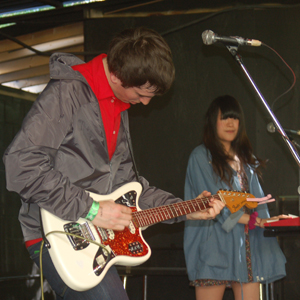 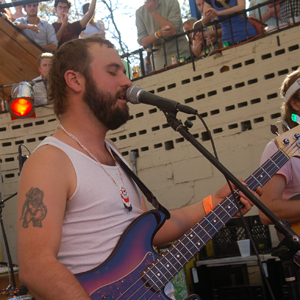 For effortless, masterful control, look no further than Akron/Family. Packing the Mohawk’s patio stage with a crowd filled on three different levels, the three-piece group shifted their music through undulating currents of genre. First enticing the capacity crowd to sing, “Back and forth / up and down” in unison before flowing into a patient ballad fronted by the group’s bass player calmly singing, “You and I and a plane makes three.” Losing no momentum they sequed into the drummer fronted, joyful “Us and Them” complete with beautiful meandering finger picking before launching everything to a massive crescendo (and backed by 4 additional percussionists) on “Ed is a Portal.” Here’s one of the best possible bands to watch in 2009. If you don’t know, your ass better call somebody. 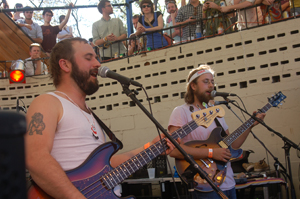 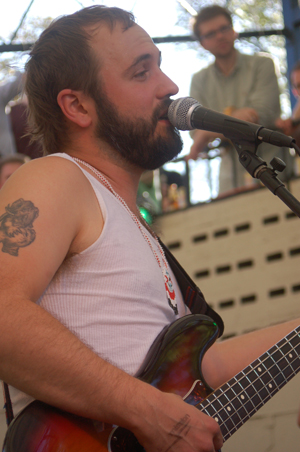 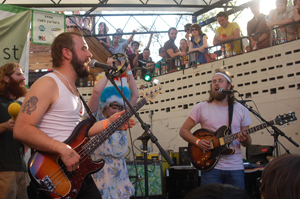 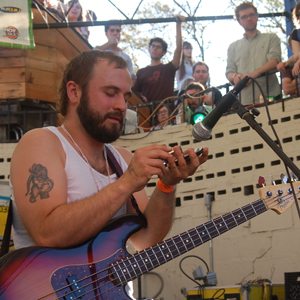 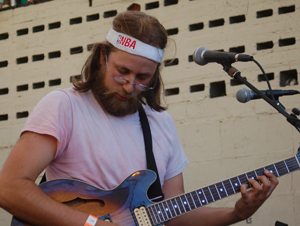 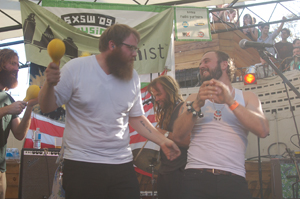 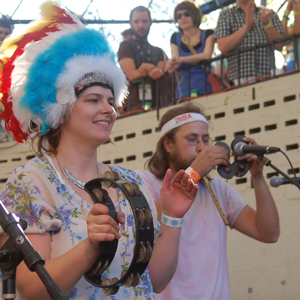 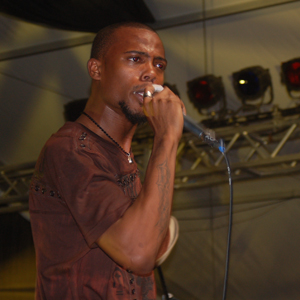 Awash in free beer, decorative surroundings, a “bloggers” lounge (w00t!) and a fully purposed Levi’s jeans mini store, a crowd of hundreds lined up around the Levi’s Fader Fort eager to join the party. Tonight, B.o.B. brought a flair for hip-hop done with a live band in a league comparable with The Roots. Not rap rock or rap metal per se, but the foursome was more of a hip-hop rock. Not as punk-y as P.O.S., not as poppy as Gym Class Heroes and not as jammy as the aforementioned Roots, B.o.B managed to hybridize hip-hop and rock in a wholly new way. Unafraid to blast power chords and distortion, his drummer blasted rolls, the lead guitarist shredded all the while, and the man himself (also known as Bobby Ray) spit rhymes with a studied glee. One track in particular “I’ll Be There Tonight” featured a spectacular chorus readymade to be a monster hit. If the sea change in hip-hop towards full band deployment is starting to take hold, the real winners are the fans. 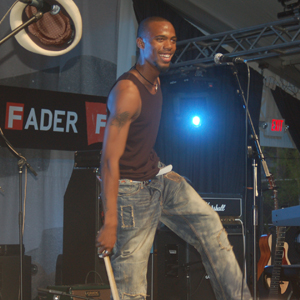 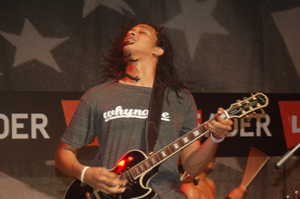 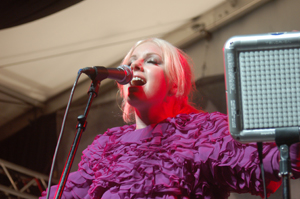 Sporting a short and sexy lavender skirt, British popster Little Boots closed out the first night of the Fader Fort. Triggering the bulk of her music manually with a portable shoulder-height sequencer, Little Boots happily danced and swayed while singing, “Don’t go messing with mind.” Even though she’s tiny, Little Boots appeal comes from her charisma. Imagine a neo Christina Aguilera wired into late 90’s progressive trance with pop hooks and you’ll be about there. Question is–can Little Boots make any more headway in the US than Robyn has? 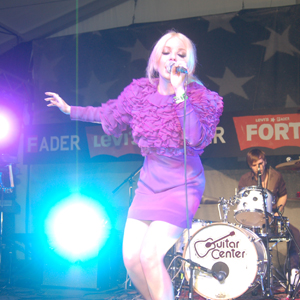 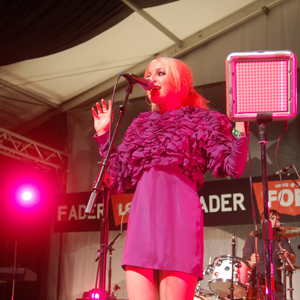 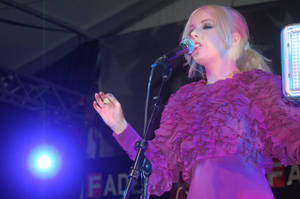 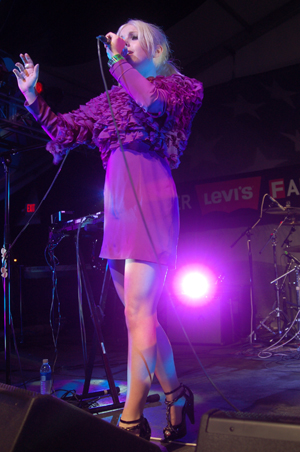 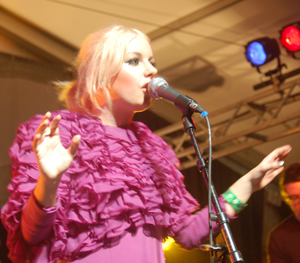 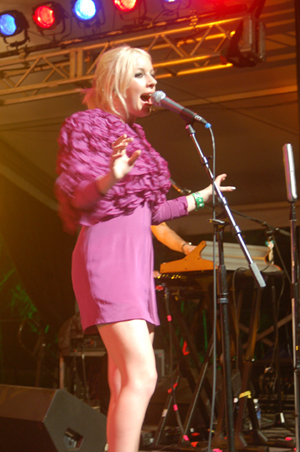