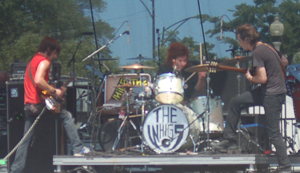 The Whigs: With pundits elsewhere already putting checkmarks next to their homebase of Athens, Ga., as well as their more-than-occasional sonic resemblance to The Replacements, everything about The Whigs sounds at once promising and derivative—on paper, at least. In practice, however, the promise comes to the fore through the kind of neat little instrumental and lyrical twists R.E.M. gave up on years ago and The ‘Mats never had time for. “Like a Vibration” from new album Mission Control and “God’s Biographer” (a cover of a song by Dutch band The Bingo Trappers) had the trio putting the crowd at the MySpace stage on notice, while sleeper pick for best song of 2008 “Right Hand on My Heart” spotlighted Julian Dorio’s drumming and Parker Gispert’s desperately paced vocals. 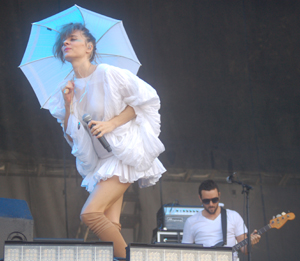 Brazilian Girls: We won’t be the first to note that they are neither Brazilian nor all girls, yet it also seems difficult to peg what these people are musically. Too dubby to be goth, too stylish to be French-touch techno, too X to be Y—the correct answer/formula for what they do might be, “They make Brazilian Girls music.” Sometimes that worked on this hot early Sunday afternoon, with Sabina Sciubba prowling the AT&T stage in an over-poofy dress that still managed to suggest very little else underneath, cooing about St. Petersburg and strange boys over her three partners’ constantly shifting dance landscape. Sometimes it didn’t, with Sciubba channeling her inner Euro-trash by shooing away photographers or cooing about pussy relentlessly. 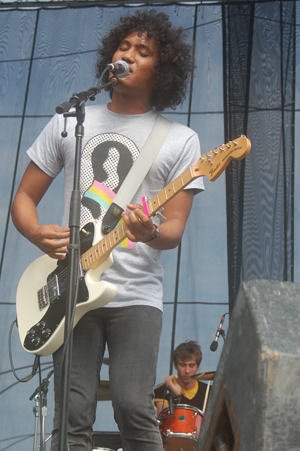 Black Kids: The world’s favorite wannabe Brits from Jacksonville, Fla., must have forgotten what the sun feels like, playing the music of Partie Traumatic in nightclub after nightclub to live up to the promise of the Wizard of Ahhhs EP preceding it. Working at the hottest point of the day with one of the weekend’s largest Citi stage crowds, the Youngblood kids (leader Rob and keyboardist sister Ali) and their posse valiantly struggled to recapture lightning in a bottle. Alas, even worthy deep album cuts like the title track and “I’ve Underestimated My Charm (Again)” came across tired at best, forced at worst. 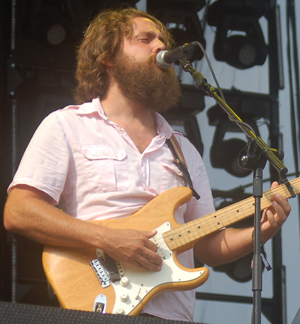 Iron & Wine: Mindful of Sam Beam’s arrival on the Bud Light stage, Chicago’s raging sun chose to take a pause for the cause and slip behind clouds and haze for the rest of the afternoon. While his legendary beard and lo-fi origins may suggest otherwise, Beam is no shaggy dog when it comes to compositions. Assisted by a small army of musicians, takes on recent work like “Woman King” and older Iron & Wine bedroom recordings like “Upward over the Mountain” suggested the lush, cool atmospheres that once were the best non-chemical things about being a Deadhead. 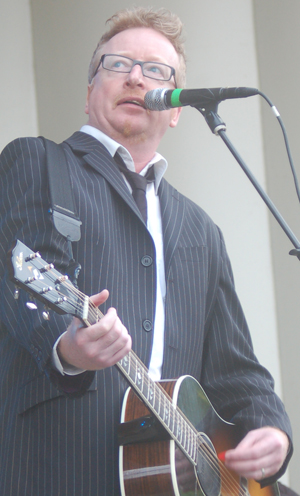 Flogging Molly: How is it that ethnic-leaning rock bands simply can do no wrong on stage? Gogol Bordello’s gypsy punk tore apart Southapalooza on Friday; now Flogging Molly’s punk for Irish pubs aims to flatten Northapalooza. Dave King’s stage presence is an infectious one: running to form chorus lines during “Swagger,” wallowing in hilariously delivered self-deprecation between songs, and otherwise whipping—ahem, flogging—the other six band members and crowd into a controlled frenzy. “Requiem for a Dying Song” and “Drunken Lullabies” rise above the highest expectations; fan favorite “The Seven Deadly Sins” is a blistering closer. Rumor has it that this shorter festival set is nothing special because all of their shows are like this. Really? Another round, then! 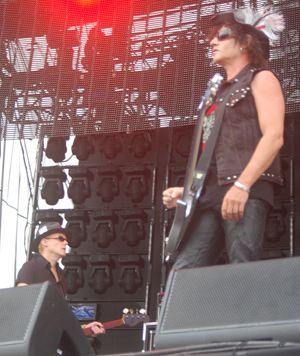 Love and Rockets: After the last two years or so of reuniting with Peter Murphy in a fully formed Bauhaus, David J, Daniel Ash and Kevin Haskins have spun off again into Love and Rockets. One wonders if all had a hand in writing the “Aloofness” chapter of the goth membership handbook. Rumors of a new album abound, and if their Lollapalooza set was any indication it promises to be just this side of unapproachable. The electronic feel of their 1990s output was all but absent. Their biggest hit, 1989’s “So Alive,” never made it to the stage. What did make the stage for diehards (“Dog-End of a Day Gone By”) and casual fans (“Ball of Confusion,” “No New Tale to Tell”) came with booming, low-end-heavy deliveries exhausting the senses. Also on stage for the end of easily the weekend’s most puzzling performance, in Flaming Lips-like fashion, were “Bubblemen” characters spawned from an ancient Love and Rockets video. 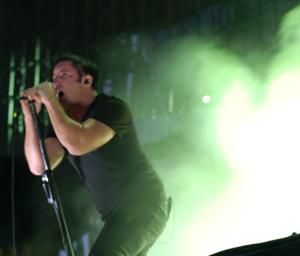 Nine Inch Nails: Seconds after The National’s music stopped, Nine Inch Nails’ music started and the concertgoing world 20,000 people knew changed forever. This wasn’t solely because of the music, itself a skillful blend of songs from three new albums (The Slip at the start, Ghosts I-IV with Reznor on vibraphone in the middle, Year Zero peppered throughout) and hits from the past (among them “Terrible Lie,” “Closer,” the Johnny Cash-dedicated “Hurt” and the record-industry screeds of Broken). Nor was it just the band’s presence onstage—Reznor throwing guitars to the ground and thanks to the crowd; Robin Finck shredding like it was still 1994; Josh Freese’s drums slicing and dicing their way through a near-acoustic “Piggy” and much, much more. If anything, the tipping point of the night was the stage, specifically the light-screen rigs around it. When the screens weren’t caging in the band, NIN’s music and physical positions changed how the light reacted; in a rather remarkable start to their encore, those roles were reversed. Against doctor’s orders and 17 years removed from NIN’s spot in the first Lollapalooza lineup, given enough money and opportunity Trent Reznor will still find the technology to fuck up your reality pretty nicely. The result? One concert you must see before you die. 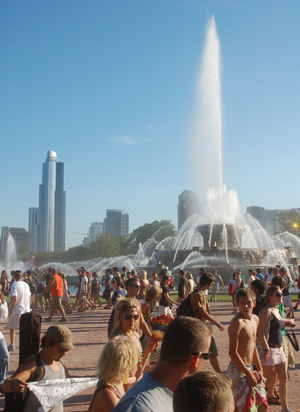 Chromeo/Phantom Planet: Throughout the weekend, The Music Lounge presented by Metromix.com at Hard Rock Hotel Chicago allowed celebrities, media, and a few other lucky souls a respite from Lollapalooza’s baser elements—the Porta-Potties, the stinging sun, the baseball diamond dust. Mornings and afternoons featured the “green” EastSport Cafe and SPIN Acoustic Stage hosted by environmentalist singer/songwriter Ben Jelen. The freaks came out for Rock the Vote Nights soaked in Ciroc, Don Julio, Newcastle, and Grant Park sweat. On Sunday Canadian blog-house act Chromeo pulled double duty, terrorizing Lollapalooza’s MySpace stage during the day before manning the Hard Rock’s turntables at night. Too modest or naive to drop anything but a fragment of their own “Fancy Footwork” into the mix, they stuck to wide-ranging but mostly recognizable material from Michael Jackson to 2Pac to Daft Punk. Then Phantom Planet, who made a brief appearance during Mark Ronson’s festival set, plugged in for a half-hour of maximum-damage power rock. Even The O.C. theme song “California,” with Ronson returning the favor on keyboards, gained considerable power when surrounded by edgier stuff like “Big Brat” and “Do the Panic.” The band egged on the VIPs in the crowd to dance and cheer (some, like Kid Sister, did) but didn’t even really need to feed on what little adrenaline they had left; Phantom Planet made their own.