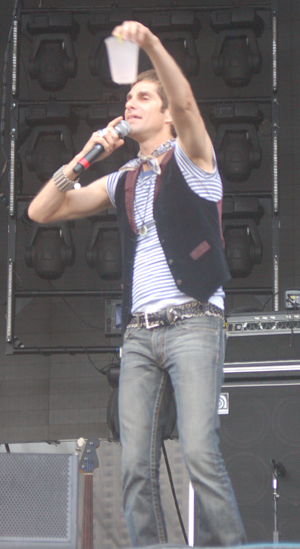 Perry Farrell: Who is the “special guest” during Perry Farrell’s visit to the festival’s DJ lounge, Perry’s? Passing by this now overcrowded venue, it appears Perry is not in notorious DJ Peretz mode (there goes that Moby rumor) but is singing with help from a guitarist, a drum machine and a dancing girl or two. (One of which quite possibly was Samantha Ronson.) Yeah, real special, off to the Porta-Potties—wait, is the crowd roaring? Now, despite the tamed hair and graying beard, the form of guitar god Slash is unmistakeable on stage. Perry starts to sing and Slash plugs in…or does he? He’s got the trademark sway going, he’s working his axe, yet the crowd chants “Turn it up!” and points fingers and thumbs skyward. The song ends and the players leave, waving and grinning, unaware that the crowd hasn’t heard a note of guitar. The chanting splits: “We want Slash!” versus “Slash sucks!” The musicians return for an encore, Perry saying they’re going to try something and hopefully not cock it up. Slash’s guitar hookup has been fixed! Just in time to cover “Jane Says”—and just in time for Perry’s microphone to conk out. The fans have had enough and take matters into their own hands, a crowd of 1,000 people singing the song for Perry, word for word, note for note. It’s a rather stunning metaphor for Perry Farrell still being the center of Lollapalooza, at its very worst and at its very best. 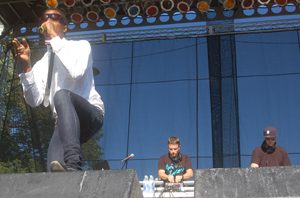 Spank Rock: If the term “axis of evil” could ever be applied to music and its scenes, one might first look to the cities of Baltimore and Philadelphia and their trade in the gloriously sinful booty-bass dancefloor beats proffered by the likes of Diplo and BlaqStarr. Spank Rock—both the MC (neé Naeem Juwan) and the titular collective of DJs and hype girls backing him—cuts an imposingly filthy figure in this environment. With his complex coochie-to-ass rhymes, the presence of Amanda Blank as a like-minded female foil and leader of synchronized sexy-time dances, and the deceptively simple beats of XXXchange and Alex Rockswell, they started rapt fans’ trip to hell in a bucket and made sure they enjoyed the ride. 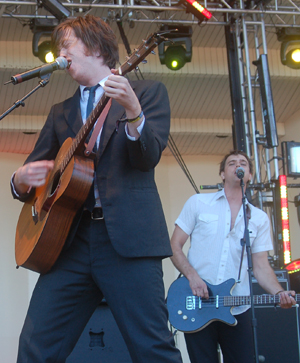 Okkervil River: Austin’s Okkervil River are something of a conundrum, not content to stay bright and chipper nor ugly and depressed for very long from album to album. What might have then translated as a schizophrenic PlayStation stage performance instead was evened out to well-dressed alt-country, playful even in the dark fantasies of “The President’s Dead” and “Unless It’s Kicks.” The softer feel of “Plus Ones” was a highlight as well—heck, any song that even mistakenly references The Five Chinese Brothers is damn cool. 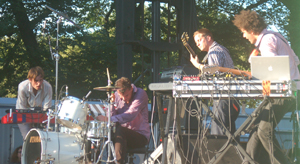 Battles: If a two-word review could suffice, it would read, “Just sick.” To elaborate: How this monster of a band and a first LP like Mirrored could result solely from chance meetings of musicians on city streets defies logic. Watching Tyondai Braxton, birthday boy John Stanier, Ian Williams and Dave Konopka coax sounds and purposeful drama on the Citi stage, they’re not simply playing on or with their instruments. They play through, around, inside and alongside them, seemingly bending and contorting Mummenschanz-style to find the right point where compositions like the epic “Tonto” fits into their mix. The visual and aural experiences are intense, at no time more so than near the end of the set when the opening march beat of “Atlas” introduces a satisfied crowd to what historians should look to as post-rock’s first, and possibly only, anthem. 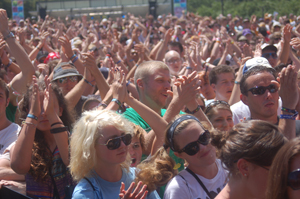 Rage Against the Machine: Say what you will about where you stand on the famed Los Angeles quartet’s legacy of songs, words, actions and positions. From a performance standpoint, Tom Morello will always be a guitar magician, the Wilk-Commerford rhythm section is crack beyond crack, and Zack de la Rocha’s flow hasn’t lost a step. Even when seemingly contradictory, de la Rocha and his players are nothing if not provocative. He critiqued cops even as cops tried to prevent a bum rush of Lollapalooza’s fences; he repeatedly asked crushing crowds to back up and “take care of each other” before playing songs like “Bullet in Your Head.” The crowd-control issues and Zack’s acknowledgement of them constituted a far tenser atmosphere than Rage’s other recent landmark U.S. date, their 2007 return at Coachella. So did the setlist, including most of their hits and fan favorites plus “Know Your Enemy,” “Ashes in the Fall” and a stellar rendition of “Born of a Broken Man” (instead of Coachella’s performances of eat-the-rich “Down Rodeo” and Afrika Bambaataa’s celebratory “Renegades of Funk”). Yes, their anger may still be a gift. Danger, however, is still danger. 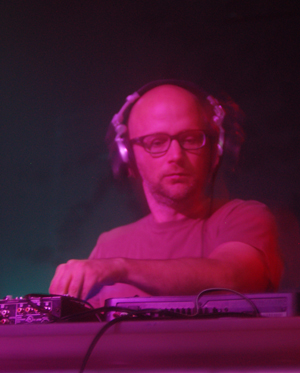 Moby/VHS or Beta: Chicago venues beyond Grant Park played host to a number of pre- and after-parties featuring many Lollapalooza artists and, occasionally, some who didn’t play the fest at all. Moby was one of the biggest names in that latter group, holding down a late Saturday night DJ slot at a downtown church-turned-club called Vision. Leading into his set were Craig and Mark from VHS or Beta, whose concerted efforts to spin consistently (and consistently well) had earned them the closing slot at Perry’s at Lollapalooza on Friday. Moby can likely afford not to spin for small crowds—and at Vision it seemed to be a very moneyed and unfortunately musically ignorant crowd—but he appeared to be in total throwback mode once he got behind the decks. For hours he spun fierce progressive house and trance with hints of disco divas and toasters, nods to a few peers (Basement Jaxx, Chemical Brothers) and a wide-ranging selection of his own work (“Go,” “Stars,” “Porcelain” and “Thousand” all appeared in the mix). Knocking back beers, smiling constantly, even making little mistakes were all signs that one of electronica’s stars could be coaxed back down to earth for a good time. 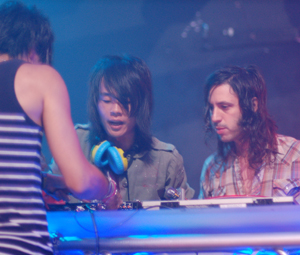